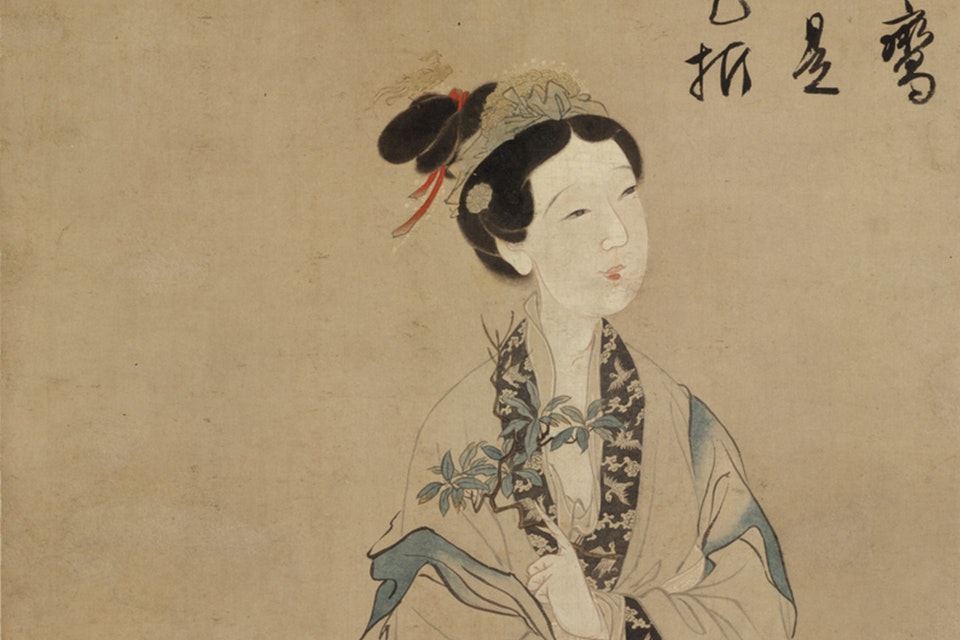 In Chinese mythology, Chang’e (嫦娥) is best known for stealing an elixir of immortality from her husband, the legendary archer Hou Yi (后羿), and escaping to become the goddess of the moon. One of the most important and popular stories in the Chinese canon, the tale of Chang’e plays a central role in the annual Mid-Autumn Festival.

The goddess Chang’e’s name is comprised of cháng (嫦), a character completely unique to her name, and é (娥), meaning “pretty, young woman”. In other styles of romanization, Chang’e (嫦娥) is sometimes referred to as Chang’o.

Chang’e was once known as Heng’e (姮娥). Her original name was changed, however, because the emperor Liu Heng (劉恆) used a similar character in his name. An emperor’s name was supposed to be unique, and having a name so similar to another Chinese cultural figure would have been considered very taboo. Thus, the name “Heng’e” was changed to “Chang’e.”

Prior to becoming the spirit of the moon, Chang’e was a woman renowned throughout China for her beauty. She had pale, milky skin, hair as black as night, and lips like cherry blossoms.

In art, Chang’e is consistently depicted as a graceful young lady wearing stylish hair ornaments and long, flowing robes. She is sometimes shown holding an elegant white rabbit. Occasionally, Chang’e may be depicted as an ugly toad.

Chang’e is married to the legendary archer hero Hou Yi. Little is known about Chang’e’s family. In some versions of her myth, Chang’e served the Jade Emperor before being condemned to live as a mortal for accidentally breaking a porcelain pot.

Chang’e is often confused with the less popular lunar goddess, Changxi, who gave birth to twelve moons. Some historians believe that Chang’e may be Changxi’s mother due to their similar names and status as moon goddesses.

While Chang’e is associated with a number of different myths, she is best known for stealing the elixir of immortality. This is a myth that features a few variations. In some retellings, Chang’e is forced to drink the elixir when her husband’s apprentice tries to steal it for himself. In others, Chang’e is simply a greedy women who steals the elixir out of selfishness. In all versions, however, Chang’e drinks the potion, becomes immortal, and flees to the moon.

One of Chang’e’s earliest appearances is in the ancient divination text the Gui Cang (歸藏). This text recounts her deeds as such: “In the past Chang’e took the Western Queen Mother’s medicine of immortality and ate it, and subsequently fled to the moon, becoming the essence of the moon.”

#Chang’e Drinks the Elixir of Immortality

When the earth was still young, there were ten suns in the sky. It was extremely hot all the time and there was no such thing as night. The extreme heat made it hard to farm crops and endangered entire populations.

One day, a skilled archer named Hou Yi (后羿) decided that enough was enough. He raised his bow to the heavens and shot down nine of the ten suns. To reward him for his heroic deeds, the goddess Xiwangmu (西王母) gave him an elixir of immortality, a prize typically reserved for immortals who had achieved enlightenment.

While Hou Yi was grateful for the gift, he felt conflicted. Xiwangmu had only given him enough elixir for one person, and he did not wish to be immortal if his wife could not live at his side for eternity. Ultimately, Hou Yi decided to remain mortal and hide the elixir under his bed.

Chang’e soon discovered her husband’s gift and began to devise a plan. That night, she found the elixir under their bed and drank every last drop. Realizing that his wife was not in bed with him, Hou Yi ran outside to find her drifting into the night sky.

Hou Yi was so angry that he grabbed his bow and tried to shoot Chang’e down; he missed every shot. As time went by, Hou Yi’s anger subsided and he began to miss his wife. He would often stare up at the moon and think about how lonely Chang’e must be. In the hopes that it might make Chang’e feel less alone (and to show that he was no longer mad at her), Hou Yi started leaving her favorite desserts and fruits out every night. He continued this practice until the day he died. This tradition continues today, as many people leave annual offerings to Chang’e during the Mid-Autumn Festival.

In an alternative ending to this tale, Chang’e is punished for betraying her husband and turned into an ugly toad, forever doomed to live out a lonely and repulsive existence on the moon. Other variations describe Chang’e becoming addicted to the elixir of immortality, and subsequently spending her days brewing and consuming it. In those versions of the myth, a white rabbit takes pity on Chang’e and flies with her to the moon, keeping her company and helping her prepare the elixir by pounding the herb into a fine powder with his legs.

#Journey to the West

In Journey to the West by Wu Cheng’en, the pig demon, Zhu Baijie (豬八戒) is punished for flirting with Chang’e on a cloudless night. Once the heavenly commander of the Jade Emperor’s naval forces, Zhu Baijie is stripped of his post and banished to the mortal realm as a demon for his amorous advances towards the moon goddess.

One of the biggest holidays in the lunar calendar, the Mid-Autumn Festival is celebrated throughout Eastern and South Eastern Asia. The festival is also considered a harvest holiday, as wheat and rice are usually harvested close around the time festivities occur. The festival is a special time where people can reflect on the past year with family, friends, and food.

During the Mid-Autumn Festival, people will commonly place fruits and sweets on open air altars for Chang’e to bless. Mooncakes, often decorated with motifs of Chang’e and her pet rabbit, are a common treat that people enjoy during the holiday.

Chang’e’s myth has also been referenced on lunar exploration missions. When the astronauts of Apollo 11 landed on the moon, flight controller Ronald Evans told Michael Collins the story of Chang’e and how she lived on the moon with a white rabbit. Collins replied that he would keep an eye out for the “bunny girl”.

Additionally, the Chinese Lunar Exploration Program (CLEP), is called the Chang’e Project (嫦娥工程). Run by the Chinese National Space Administration (CNSA), the project focuses on a series of robotic missions that hope to develop a deeper understanding of the lunar surface and eventually establish a lunar research station.