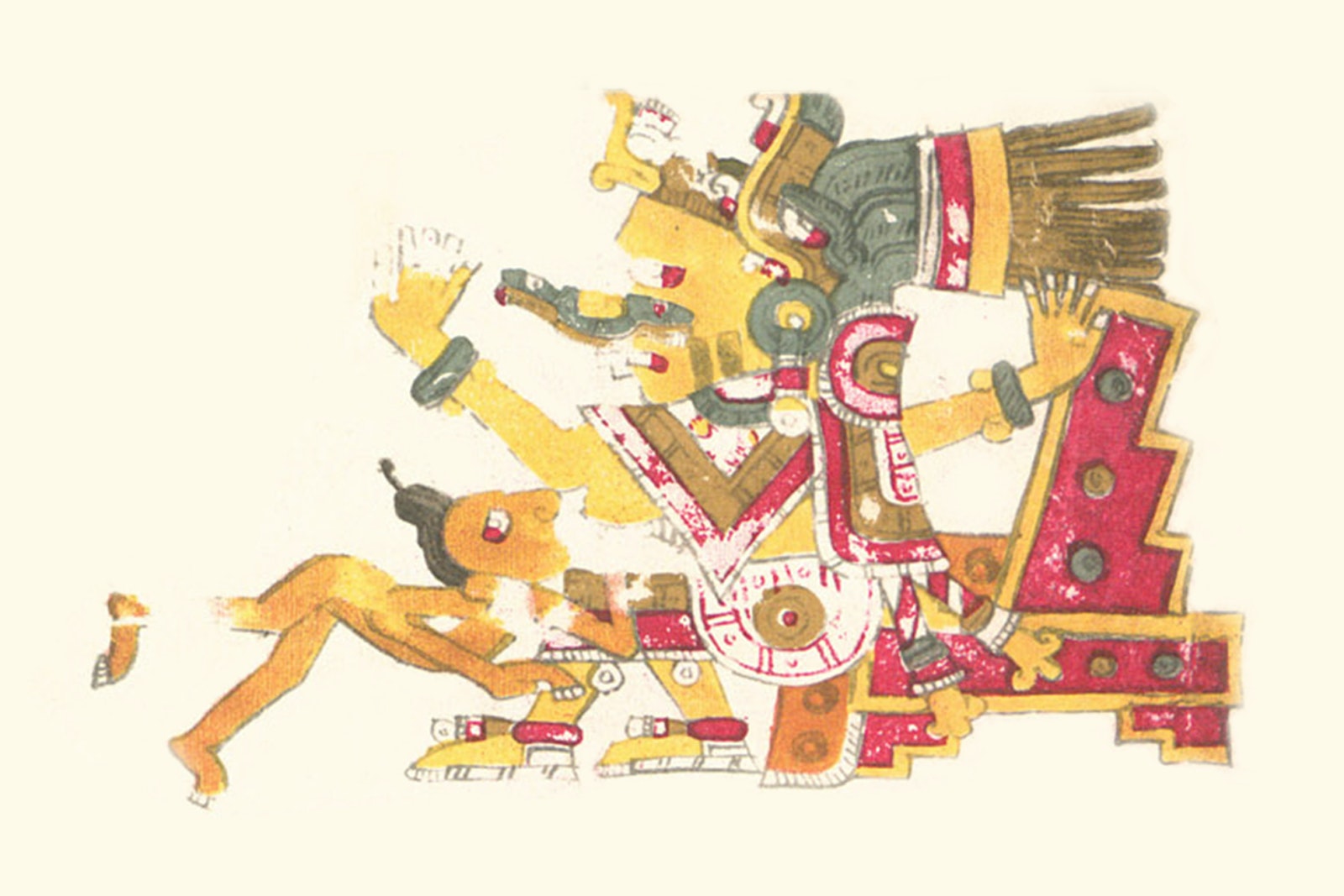 Chalchiuhtlicue [Chal-chee-oot-lee-kway] was an Aztec water goddess and the sun of the fourth age; she was also the patron of newborns and the sick. Along with her counterpart Tlaloc, she was responsible for the timely arrival of waters necessary for the successful harvests. Water was the basis for much of Aztec life, and as such Chalchiuhtlicue held an incredibly important position in the Aztec pantheon.

Translated literally, the Nahuatl word chālchihuitl meant “heart of the earth.” The word was seldom used in this manner, however, and was used instead to refer to precious green stones like jade and turquoise.1 Chalchiuhtlicue’s name was based on this figurative meaning, and could be translated as “Jade her skirt;” a more common translation was “She of the jade skirt.”2

As a water goddess, Chalchiuhtlicue was responsible for the welfare of oceans, rivers, springs, and lakes. Chalchiuhtlicue could do more than simply control water, however. Her waters had healing properties and she was regarded as the patron god of newborn children and the sick.3

She was usually depicted kneeling and wearing a headdress with tassels on either side of her head.4

Chalchiuhtlicue was related to the rain god Tlaloc and the Tlaloques, but the passage of time has blurred her precise relation to them. Variously, she has served as Tlaloc‘s wife, sister, and mother.5

Chalchiuhtlicue was an important member of the Aztec pantheon. She was created early in the formation of the Aztec cosmos, and would serve as the fourth of five suns. The Aztecs conducted annual sacrifices to sustain her and repay the debt owed to her for her life-giving waters.

According to the Codex Ramirez (a 16th-century Spanish manuscript recording Aztec religious practices) Chalchiuhtlicue was created by Tezcatlipoca, Xipe Totec, Quetzalcoatl, and Huitzilopochtli shortly after the world’s creation.

According to this myth, Tlaloc and Chalchiuhtlicue were created simultaneously as husband and wife.

All four divinities joined themselves together, and made Tlalocatecli, [Tlaloc] and his wife Chalchiutlique, [Chalchiuhtlicue] whom they assigned to be the gods of water, to whom they betook themselves in prayer whenever it was needful.6

While all four gods worked together to form the water deities, everything else up to this point had been the work of only one or two gods (including the gods of the dead, Mictlantecuhtli and Mictecacihuatl, the Aztec calendar, maize, and even the earth itself). This detail suggests that the water gods were tremendously important to the Aztecs, and that the rains they brought were paramount to the survival of Aztec civilization.

According to Aztec mythology, there have been a total of five suns, each represented by a god. The first sun was Tezcatlipoca, the second was Quetzalcoatl, the third was Tlaloc, and the fourth was Chalchiuhtlicue.

When Chalchiuhtlicue became the sun, she acted with great love towards her people. A jealous Tezcatlipoca accused her of faking her feelings towards the people in order to gain their adoration. This accusation devastated Chalchiuhtlicue, and she proceeded to cry tears of blood for 52 years, drowning the world in the process. Humans had to turn into fish in order to survive the deluge.7

According to the Codex Ramirez, Chalchiuhtlicue cried so much that the heavens themselves fell. Tezcatlipoca and Quetzalcoatl had to turn themselves into massive trees in order to return the heavens to the sky.8

The Aztecs believed that their gods required nourishment in order to live. So too, they felt that they owed their lives to the water gods, as without the seasonal rains they would surely starve or die of thirst. Human sacrifice served to both nourish the gods and satisfy the debt that the Aztecs incurred each year.

Once per year, a 6 or 7 year old child was sacrificed to Chalchiuhtlicue at Lake Texcoco. This sacrifice was arranged to coincide with a sacrifice to Tlaloc that took place on top of his eponymous mountain.9

Today, the lake has been mostly drained and exists only as a marshy stretch on the outskirts of Mexico City.10

In her 1940 self-portrait, Freida Kahlo wore a necklace bearing the glyphs of both Chalchiuhtlicue and Tlaloc.

The skincare company H20 Plus’s former plant in downtown Chicago was adorned with tile panels depicting Chalchiuhtlicue alongside the Mesopotamian god Ea.11 In 2015, the company closed the plant and relocated it to San Francisco.12 It is unclear whether or not the homage to Chalchiuhtlicue was relocated as well.