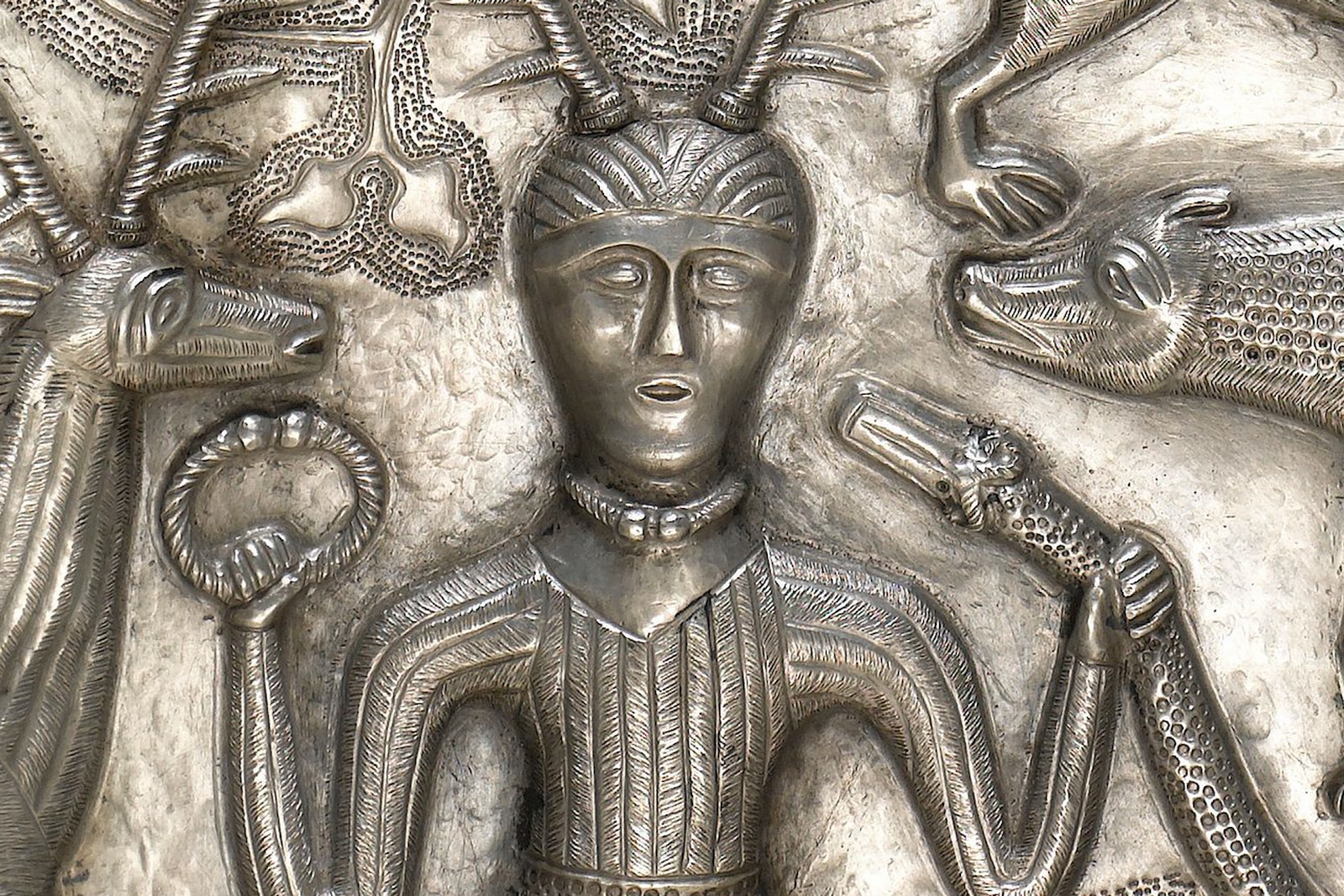 Cernunnos was the Gaelic god of beasts and wild places. Often called the Horned One, Cernunnos was a mediator of man and nature, able to tame predator and prey so they might lie down together. He remains a mysterious deity, as his original mythos has been lost to history.

Though Cernunnos himself appeared primarily in Ancient Gaul, similar characters have been found around the world, including in other Celtic regions.

Cernunnos was an ancient Gaelic word meaning “horned” or “horned one.” The name shares its etymology with similar words across the Celtic world, including several Gallo-Roman cognates. The use of cern for “horned” was common in Indo-European languages, such as the Greek corn (the word unicorn, referring to the one-horned horse-like creature) and several Latin taxonomic terms for antlered animals.

In contemporary scholarship, Cernunnos has become a name used for other Celtic horned gods whose names have been lost to history. There is little evidence to suggest that the name Cernunnos was used outside of Gaul. Nevertheless, academic and religious scholars alike have used the name as a kind of catch-all for Celtic horned gods, as well as horned deities as far afield as India.

Other titles have been added to Cernunnos over time—often by modern neopagans—such as “Lord of the Wilds” or “God of Wild Places.” Such titles have no historical basis, but have come into popular usage with the rise of neopagan traditions.

Little is known of Cernunnos, for almost nothing was written about him. He was a god of wild places, and often appeared as a bearded man with antlers. Some scholars believed his name and characteristics originally belonged to a number of horned gods that were then mixed together. Others have suggested Cernunnos’ traits were taken from Greco-Roman deities of similar appearance. In any case, it is best to remember that these gods were not necessarily the same entity, but instead emerged from similar cultural origins.

Cernunnos was a god of the wild who ruled over pristine nature and uncivilized ways. Animals were his subjects, and free-growing fruits and vegetable his bounty. Classical depictions of the deity included gatherings of animals such as elk, wolves, snakes, and aurochs. Such gatherings were possible thanks to Cernunnos’ abillity to bring natural enemies into peaceful communion with one another. This ability may have cast Cernunnos as a protector and provider amongst rural tribes and hunters.

Similarly, Cernunnos may have been a fertility god or god of life. In some classical societies, the natural world was the origin of all life. Under this schema, the god of the wilds would also have served as a god of life, creation, and fertility.

Cernunnos was often shown with a torc—a traditional Celtic necklace that was made of metal. In some depictions he merely holds one, while in others he wears them either on his neck or antlers. Some scholars have connected Cernunnos to oak trees, which served as prominent symbols in Celtic lore and druidry.

Cernunnos began a particularly active second life in the 19th century, when spiritual movements seeking to revive pre-Christian European beliefs grew in popularity. The deity appeared prominently in Margaret Murray’s The God of the Witches as the embodiment of horned deities; the text stated that Cernunnos was the god of witches during pre-Christian times, and that his worship continued in secret pockets throughout Europe following the spread of Christianity. Despite the books problematic nature and many generalizations (particularly in regard to Cernunnos), it did bring the horned god back into the public eye.

Cernunnos, the Horned God of neopagan traditions, is lord of both life and death; he grows old as the year progresses before being reborn and starting the cycle anew. He exists in tandem with the divine feminine, the Goddess, who is at once both mother and lover; in many traditions, his power stems from her. Note that Cernunnos neopagan attributes do not necessarily reflect his pre-Christian characteristics.

Cernunnos was a particularly mysterious deity. His name appeared only once in historical sources, and none of his tales have survived from antiquity. Modern scholars and neopagans have nevertheless attributed a number of tales to the horned god.

The name Cernunnos has appeared only once—on the Pillar of the Boatman. Carved in Paris sometime during the 1st century CE, the pillar depicted a number of Roman and Gaelic gods, Cernunnos among them. In this depiction, Cernunnos’ torcs hung around his antlers, rather than his neck or hands. While it is unknown which tribes might have worshipped Cernunnos, it is clear that horned gods were commonly worshipped throughout the Celtic world.

The most famous image of Cernunnos—which may not depict him at all—was found on the Danish Gundestrup Cauldron. Dating back to the 1st century BCE, the cauldron was believed to have originated near Greece (likely in Gaul or Thrace), due to the art style and metallurgic practices required to create it. The horned god depicted on the cauldron bore similarities to those seen on Celtic stones, statues, and books during the early Christian period.

Cernunnos may have an etymological link to Conach Cernach, a character from the Ulster cycle. Conach Cernach’s name may have simply meant “triumphant,” but could also mean “angular,” or “cornered,” given its similar etymology to Cernunnos. There were few similarities between the characters, however, and their names may be related simply by chance.

Some scholars have connected Cernunnos to the legend of Herne the Hunter, a character that first appeared in Shakespeare’s The Merry Wives of Windsor. After committing a great offense, Herne killed himself to avoid dishonoring himself; he then proceeded to haunt the forest, terrorizing animals that crossed his path. Since the 19th century, scholars have attempted to find verifiable evidence that this story predated Shakespeare. While no irrefutable evidence has been found, some claim it nevertheless exists in the form of a Celtic (or Anglo-Saxon) legend that originated in Windsor.

Horned gods were a popular image in world mythology, as many shamanic cultures used sympathetic magic to appear as the animal whose attributes they wish to take. When shamans wished to take on the attributes of a deer and elk, they would wear the animal’s fur and antlers.

Cernunnos closest analogues in world mythology were Pan and Silvanus from the Greco-Roman world. Pan and Silvanus were horned gods (most commonly depicted to goat-like features) who ruled the wild places of the world; the Greeks and Romans would have closely associated the two.

Cernunnos was also closely connected to the Germanic Wotan, a variant of the Norse god Odin. Wotan was the leader of the wild hunt, a horned god who lead spirits on hunts for powerful warriors and the spirits of the dead. Wotan was also closely related to animals, and in some cases even served as their lord. It is unclear if these similarities to Cernunnos are intentional, or simply mere coincidence.

Some scholars believe that, along with Pan, Cernunnos may have inspired the enemies of the Knights Templar to create Baphomet, a false deity/demon they were accused of worshipping. Baphomet displayed physical similarities to both deities, and his name was a corruption of a Latinized form of “Muhammed.” Baphomet has since become a prominent figure in modern witchcraft and Satanic religion.

An artifact from the ancient Indian city of Mohenjo-Daro depicted a character with striking similarities to Cernunnos, a horned bearded figure surrounded by animals. The image, which appears on the Pashupati seal, may have depicted the god Shiva or Rudra; alternatively, it may have simply been an archetypical Middle Eastern god of the wild that bore similarities to Cernunnos.

Despite (or perhaps because of) his mysterious nature, Cernunnos has made a number of appearances in popular culture: