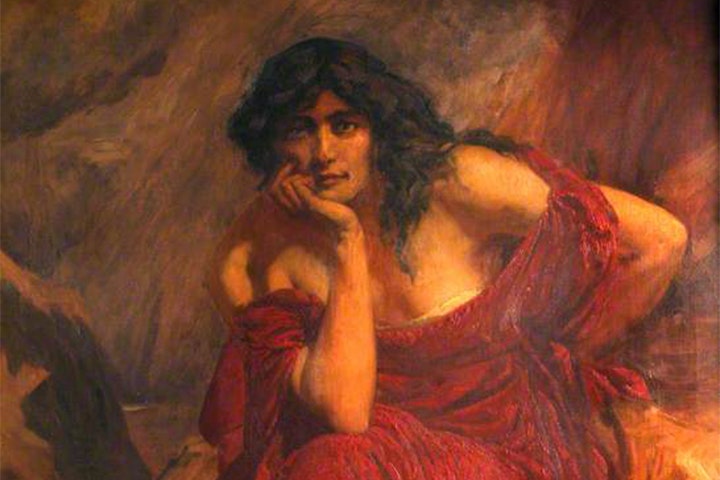 Ceridwen is a Welsh sorceress, a white witch with the power of Awen. She can brew life-altering potions, to change her form, and to inspire knowledge and beauty in others. In some tellings of her legend, she is a goddess of creation and inspiration, giving her further powers.

She appears primarily in “The Tale of Taliesin,” included in the epic cycle of the Mabinogi.

Ceridwen is a name of Welsh origin, originally rendered as Kerdwin or Cyrrdven. Its exact meaning is unknown, due to the fact both parts of her name, Cerd and Wen, could have multiple meanings. Wen most likely means “woman,” but if originally derived from gwen it may be interpreted as “fair”, “blessed”, or “white.” Cerid can be translated as “bent” or “crooked”, but could potentially mean “poetry” or “song.”

Ceridwen, in its various spellings, remains a popular name in Wales and the English-speaking world.

Ceridwen is a powerful Welsh sorceress, and one of the most powerful witches in Celtic mythology. A mother and a wise woman all at once, she is blessed by the gift of poetic wisdom, inspiration, and prophecy, called collectively Awen in Welsh lore. This power comes from her magical cauldron, where she brews great potions to help others. She has many of these abilities herself without the cauldron’s power. She also has a magical throne, from which she derives her sovereignty and some of her powers.

Potions brewed from her cauldron range in effect, such as changing the appearances of others, allowing the imbiber to shapeshift, or give the gift of Awen itself. Though her potions grant the gift, they are also quite dangerous. After the gift is given, a single drop of the potion has the power to kill. Ceridwen is thus careful with whom she gives her potions to, as she wishes no harm on others but knows that power comes with a price.

Ceridwen is a white witch, meaning that she uses her gifts and her cauldron to help others. While this is largely altruistic, at times she does use it for the benefit of those immediately around her, such as her intention to help her son Morfran. When her ploys backfire or go awry, she can let her anger get away from her, but ultimately finds herself before she does anything drastic.

She is sometimes depicted as a mother or a crone figure, varying depending on the ages of her two children. She resides at Bala Lake, also called Llyn Tegid for her husband.

Depending on the translation Ceridwen can also be seen as a goddess, specifically a creator or sovereignty goddess. Her story was recorded centuries after it was first told, and her status as sorceress may have been to make the story more applicable to a Christian audience, reducing a goddess to merely a powerful white witch who helps others.

In this form, modern neopagans worship her as a prominent deity of wisdom and creation, though sometimes liberally mixed with other goddesses.

Ceridwen is married to Tegid Foel, translated as “Tacitus the Bald,” a powerful leader who resides at Bala Lake. They have two children: a daughter, the beautiful Creirwy, and a son, the hideously deformed Morfran Afaggdu, whose skin was burned and mind was warped. Morfran later appears as a warrior in the court of King Arthur.

By way of sorcery, and perhaps by accident, Ceridwen becomes the mother of a third child, the famed bard Taliesin. Carrying all the gifts of his mother, he is advisor to many rulers of Britain, a powerful druid and bard, and a figure that is often depicted as a precursor or regional variant of Merlin.

Ceridwen appears primarily in the Book of Taliesin, a story sometimes included in the famous Mabinogi. It is her only appearance, but one of the most famous in Celtic mythology.

So she resolved, according to the arts of the books of the Fferyllt, to boil a cauldron of Inspiration and Science for her son, that his reception might be honourable because of his knowledge of the mysteries of the future state of the world.The Mabinogi, trans. Lady Charlotte Guest

Ceridwen and her husband Tegid Foel worried over the life their poor son Morfran might live in his current state. Deformed and lacking any wit, Ceridwen thought to use her cauldron to make him at once beautiful and wise. She began to concoct a potion in her cauldron and set a blind man, Morda, to tend the fire beneath while a servant boy, Gwion Bach ap Gwreang (meaning “son of Gwreang”) stirred the pot.

They continued in this role for one year, upon which the potion was completed. But Ceridwen withheld important information from them: only three drops of the potion held the power to make the imbiber beautiful and wise. The rest was a deadly poison. Upon finishing the final stir, three drops fell onto Gwion’s thumb, which burned him. He put his thumb to his mouth, and at once became beautiful and wise.

The boy knew that Ceridwen would be angry with him and fled. Catching herself before she fed the potion to Morfran, she chased Gwion in a rage. Now gifted with the same knowledge of magic as Ceridwen, Gwion transformed himself into a hare and ran. Ceridwen became a greyhound and pursued him. He then became a fish; she transformed into a hungry otter. Again, he changed shape, becoming a bird. And again, Ceridwen transformed into a hawk.

Finally, knowing that she would catch him, Gwion transformed himself into a single grain of wheat. Ceridwen, using her magic (or being a goddess), found the grain and ate it. But the potion had another effect, and Gwion did not die. Instead, the grain took seed and Ceridwen became pregnant. Though she thought she would kill Gwion when he was reborn, she ultimately relented when the child was born, more beautiful than anything she had seen.

Instead, she resolved to push the child out to sea. Placing the boy into a leather-skin bag, he was eventually found by Prince Elffin ap Gwyddno, who in turn raised the boy as a prince. He named him Taliesin, and he grew to be a wise bard and advisor to kings.

Ceridwen is a popular subject in literature and poetry, including the 15th century Llyr Taliesin, a series of poems related to Taliesin. One such poem is from the perspective of Ceridwen, called “The Chair of Ceridwen” and tells of her powers. Several poems mention her cauldron of inspiration, and list her alternately as a goddess or witch of poetry. Similarly, Victorian literature, borrowing heavily from figures of Celtic mythology, sees poets and writers such as Thomas Love Peacock and John Rhys include her as an important subject.

Elsewhere in the legends of the Celtic world, cauldrons of inspiration are highly common, making Ceridwen’s cauldron one of the most archetypal symbols of power. The cauldron is also a symbol of the Underworld, which appears prominently in many Welsh and other Celtic myths. The cauldron’s knowledge-granting powers are also similar to the Salmon of Truth in Irish legend, found in the story of Finn MacCool.

The story of Ceridwen and her son Morfran appears adjacent and later as a part of larger Arthurian legend. Morfran comes to serve in the court of King Arthur, and Ceridwen’s cauldron may be an inspiration or manifestation of the Holy Grail.

Ceridwen is similar to a number of witches across the world, namely the witch goddess Circe in Greece and Baba Yaga in Slavic mythology.

Ceridwen appears in several pieces of popular culture, including: