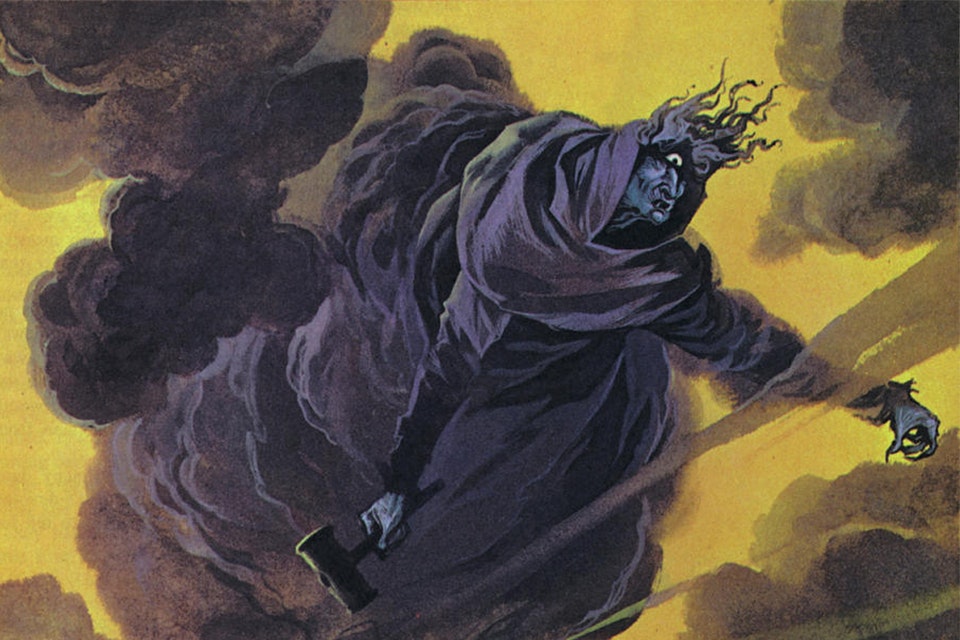 One of the great Celtic ancestors, the Cailleach was the goddess of the cold and the winds. Sometimes known as the Veiled One or the Queen of Winter, the Cailleach determined the winter’s length and harshness. As both divine hag and creator deity, she remains a popular topic for poets and writers.

The Cailleach dwelled in Scotland, Ireland, and the Isle of Man, and many places remain dedicated to her within these regions.

Cailleach is a common word in both Scottish and Irish Gaelic meaning “old woman” or “hag.” This current word was derived from Caillech, a term meaning “veiled one” in Old Gaelic. These terms stem from a base root shared with many others that describe women, such as caillin.

Poets have given her different names across time: Digdi (or Digde), Milucra, Biróg (the fairy-woman who saved Lugh of the Long-Arm as an infant), Buí (one of Lugh’s wives), and Burach. Due to many of these being separate characters altogether, some scholars believe that Cailleach was more of a title than a name—any old woman could be called a cailleach.

Her most prominent title was Cailleach Bhéara, revealing her as master of winter. The many regions named for her often gave her unique titles reflective of their respective landscapes. Examples included An Chailleach Bhéara (The Hag of Beara) in County Cork, Ireland, and “the Storm Hag(s)” in Scotland.

The Cailleach appears primarily as a veiled old woman, sometimes with only one eye. Her skin was deathly pale or blue, while her teeth were red and her clothes adorned with skulls. She could leap across mountains and ride storms. In the Manx tradition, the Cailleach was a shapeshifter capable of transforming into a giant bird.

The Veiled One was a creator deity that shaped much of the known landscape; whether she did so intentionally remains unclear. Her tools of creation and destruction included her hammer, with which she was able to control storms and thunder. In some legends, she also controlled a well that would occasionally overflow and flood the land.

The Cailleach was neither fully good nor fully evil; her intentions varied from tale to tale. Through her association with storms and thunder, she was a natural and wild destructive force. Despite this, she also cared deeply for animals both wild and domestic during the dark winter months. In all three Gaelic-speaking regions, she was the patron of wolves emboldened by winter hunger; in Scotland, she also served as a deer herder.

The Cailleach was both ageless and immortal; as winter gave way to spring, she would take a drought that returned her to youth. In Manx legend, she spent half the year as a young woman and the other half as a old crone—she was only known as the Cailleach during the latter half. In Ireland, she had seven periods of youth, after which she remained old permanently.

The seasonal division between summer and winter—where the Cailleach ruled winter and Brigid ruled summer—highlighted the association of the two goddesses. On Samhain, or October 31st, the Celtic year ends and winter begins, marking the return of the Cailleach. In Scotland and the Isle of Man, the Cailleach transforms into Brigid during Beltane, a fertility festival held on May 1st.

The Cailleach was also a goddess of grain, a key resource in surviving winter. The last sheath of grain harvested was dedicated to her, and used to begin the next planting season.

Like many Irish goddesses, the Cailleach was linked to sovereignty and rulership. Before anyone could rule the land, they had to first garner her approval.

One of the Cailleach’s most remarkable attributes was her association with places. The Cailleach was tied to inhospitable locations across the Gaelic-speaking Celtic world. The Cailleach had more ties to local geography than any other Celtic deity.

Many locations have retained their Cailleach connections to this day. Such locations include:

The Cailleach had few explicit familial ties, the most well-known of which was the Bodach, a Scottish trickster spirit with whom she had many children.

According to an old Irish poem, she was a maiden seven times, allowing her to have many children by many husbands, as well as countless foster-children. By the time her final period of youth had ended, she had outlived her husbands and children alike, and was said to be the maternal ancestor of every Irish man and tribe.

While many of the Cailleach’s myths have faded from memory, a number of rituals and traditions still exist.

On Imbolc, or February 1st, of each year, the Cailleach runs out of firewood for the winter. In the Manx tradition, she transforms into a great bird and collects firewood in her beak. In Ireland and Scotland, meanwhile, she collects firewood as an old woman. If she wishes for winter to last longer, she makes the day sunny and bright for her search. If she accidentally oversleeps, the day is stormy and gray. Thus, tradition holds that if February 1st is gray and wintery, winter will be shorter that year; if the day is bright, winter will return due to her preparation.

In the United States, this tradition was transformed into Groundhog Day, removing the Cailleach while retaining the central ritual.

The Cailleach, the Bodach, and their children appeared to the people of Glen Lyon and Glen Cailleach seeking shelter. Despite their fearsome reputations (or perhaps because of them), the family was granted shelter. During this period, the surrounding glens became incredibly fertile. Before departing the area, the Cailleach gave the people a parting gift: the area would be eternally fertile, provided that they put up stones for her family between May 1st and October 31st—from Beltane to Samhain.

Each year, this ritual is repeated.

The maidens rejoice
When May-day comes to them;
For me sorrow is meeter,
I am wretched, I am an old hag.
-“Lament of the Hag of Beara”, trans. Lady Gregory

The Cailleach has appeared in literature throughout the ages. In the 8th century poem, “Lament of the Old Woman,” she reflects on her faded youth and laments its loss. In Donald Alexander Mackenzie’s 20th century retelling of Scottish folklore, the Cailleach became Beira, Queen of Winter. The work retained much of the Cailleach’s classic characterization and, along with Lady Gregory’s translation of old Irish tales, served as one of the more prominent sources of Cailleach myths.

The Cailleach was unique among Celtic deities, only appearing in Gaelic-speaking regions—namely, Ireland, Scotland, and the Isle of Man. While Brythonic Celtic regions told stories involving similar hags, none of these characters could rival the consistency the Cailleach. Such hags included Black Annis, a blue-faced hag of Leicester with iron claws who supped on children. These hags were often closer to the popular notion of a hag, rather than the more capricious Cailleach.

Outside of the Celtic world, the Cailleach has numerous similarities based on her individual attributes. As a creator deity, she bore similarities to the Greco-Roman Gaia. The Cailleach was also remarkably similar to the Norse deity Skadi, the goddess of winter and darkness, as well as the Germanic Holle, wife of Wotan (Odin) and master of winter’s cold. Though her stormy hammer closely resembled Thor’s hammer Mjolnir, the Cailleach’s behavior and appearance were closer to that of Thor’s foes, the frost giants.

In Slavic mythology, Baba Yaga carried many of the attributes of the Cailleach. An impossibly old woman just as likely to help as hinder, Baba Yaga made many appearances in Slavic folklore. Her leaping chicken-legged hut moved in much the same way the Cailleach did when she traveled between mountains.

The Cailleach has appeared in multiple pieces of popular culture, including: