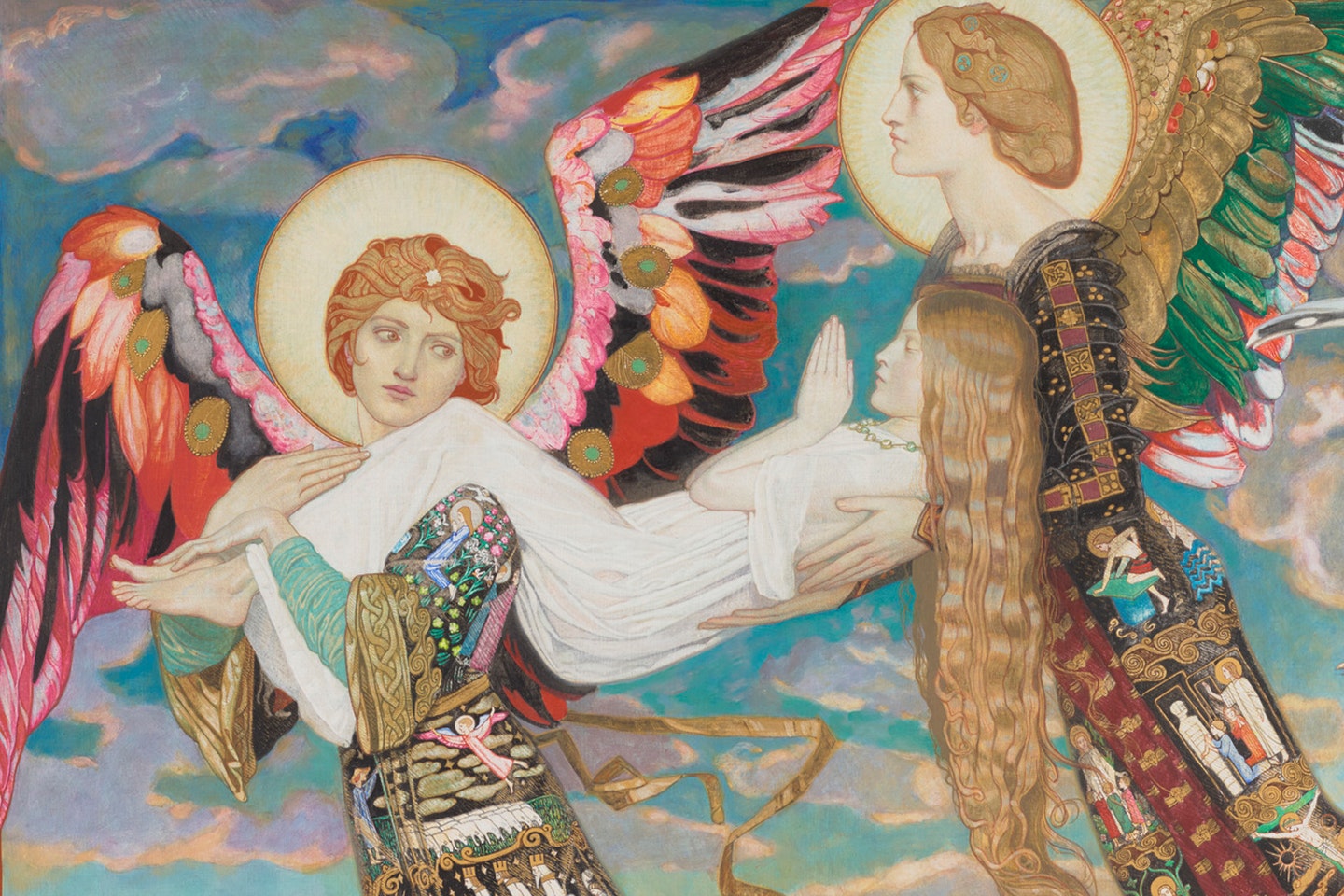 Brigid, or the Exalted One, was the Irish goddess of spring, fertility, and life. Beloved by poets, she was the master of both healing and smithing. Her holiday, Imbolc, was held on February 1st and marked the midpoint of winter. Many of Ireland’s wells and waterways were devoted to her.

As a member of the Tuatha Dé Danann, Brigid was the wife of High King Bres and mother of Ruadán. She shares many similarities with the Catholic St. Brigid of Kildare, the patron saint of Ireland.

Brigid has been Anglicized from the Old Irish Brid in multiple ways: Brigit, Brig, or Bride (from which the word bride is derived). Stemming from the Proto-Celtic word Briganti, meaning “the High One” or “the Exalted One,” Brigid is the origin of the popular name Bridget. The name likely refers to the goddess’s connection to sunlight and fire, but may also be related to dawn goddesses across the Indo-European world. Brigid is derived from the Proto-Indo-European root for “to rise” or “high”, as is the English word bright.

Brigid was also known as the Goddess of the Wells, due to her connection to wells and waterways.

Brigid was a goddess full of contradiction. She was a goddess of healing, fertility, and motherhood, but also of passion and fire. Further complicating matters, Brigid was a goddess of serenity and water as well. Evidence of her worship has been found throughout Ireland, reflecting her importance as a powerful, yet personal deity. When she was not protecting mothers and newborn children, Brigid inspired many of the writers and poets for which Ireland is internationally renowned.

Brigid often appeared as a fiery-haired goddess wearing a cloak of sunbeam. She appears primarily in the form of a maiden or a mother, depending on the tale. These multiple forms may have been reflective of her status as a triple goddess.

Brigid’s domain over fertility and motherhood included not only mortals and gods, but animals as well. Her role as protector of domesticated animals was demonstrated via the animals she kept:

Brigid was a goddess of fire, passion, poetry, and invention. Even well into the Christian era, Irish writers credited Brigid as their inspiration. Through her connection to high architecture, She was a learned goddess—in part through her connection to high architecture—and inspired not just smiths, but craftsmen of all trades. Her connection to healing and wisdom may have been aspects passed on from her father, the Dagda, who was a master of magic and mysticism. Her ability to always know what was needed was one of her many sacred gifts.

Her status as a fire goddess was also apparent in her connection to the sun, and dawn in particular. Imbolc reflected the sun returning to the world as winter’s hold on the land lessened. Her name, “Exalted One,” reflected not only her nature as a solar deity, but her connection to crafting and wisdom as well.

Her invention of keening, a lament for the dead, reflected her status as a goddess of life and death. Brigid also protected cemeteries, which can be found at many of her holy sites.

Given the diversity of her attributes, Brigid was believed by many to be a triple goddess. Unlike most triple goddesses in Ireland, however, all of her aspects were named Brigid. Her status as a triple goddess allowed her to have multiple husbands, parents, and children without causing contradictions in the Celtic mythos.

Brigid’s holiday, Imbolc, took place on February 1st and marked the beginning of the Irish year. During the holiday, offerings such as food or coins were brought to waterways or wells; sites named in Brigid’s honor were especially popular. Those seeking her blessings often asked for healing, but might also ask for protection (often for their household, children, and/or livestock) or inspiration.

Brigid served as a water goddess and held dominion over both rivers and wells. Two of her most famous wells were:

Brigid also had a clear symbol going back to prehistory known as the Brigid Cross. Made of rush or grass, this geometric cross is still used across Ireland, and is often hung above the doorways of homes and businesses. It is especially common around Imbolc, and is also used as one of the symbols of St. Brigid. The cross has several three-armed variants.

In another tale, Brigid was the wife of Tuireann, and mother of his three sons, Brian, Iuchar, and Irchaba. The Sons of Tuireann slew Cian, the father of Lugh of the Long-Arm, while he was transformed into a pig.

Brigid appeared in a number of Celtic myths and legends, often in roles that showcased her wide range of skills and vast knowledge.

The Lebor Gabála Érenn established Brigid as the wife of Bres and daughter of the Dagda, placing her in a position of high esteem. She came to Ireland alongside the rest of the Tuatha Dé Danann. Shortly after their arrival, the tribe came into conflict with the Firbolg and the Formorians, prior settlers that controlled the majority of Ireland

Brig came and keened for her son. At first she shrieked, in the end she wept. Then for the first time weeping and shrieking were heard in Ireland.
Cath Maig Tuired

Both battles of Moytura pitted the Tuatha Dé Danann against earlier settlers of Ireland. The first ended in a victory over the Firbolg in County Galway, as well as the annexation of Connacht. In County Sligo, the Tuatha Dé Danann faced off against the Fomorions, fearsome giants of hideous appearance and abhorrent cruelty. This battle, too, was a victory for the Tuatha Dé Danann, though it came at a great price. Brigid’s father, the Dagda, was mortally wounded and died after returning to his home. Though Brigid’s son Ruadán slew the smith-god Giobhniu, he succumbed in the battle as well. Brigid rushed to the battlefield to mourn her son. From her lips came a loud lament known as keening. This act was the first time sorrow had been felt in Ireland, and it birthed a solemn tradition. Henceforth, Irish women would keen at the graves of their dead.

#Folktales of Healing and Inspiration

Many tales existed of strangers who came to Brigid (or St. Brigid), asking for her blessings, her inspiration, and her healing, which comes to those pure of heart and intention and those clever and cunning. To those who lack these things, her gifts come at a price: a lesson, giving them what they really need to act better and be better.

Brigid shares many of her attributes with the Christian saint of the same name—St. Brigid of Kildare. St. Brigid is the patron saint of babies, midwives, cattle, dairymaids, and Ireland itself. Scholars have long puzzled at the link between the two. Historical evidence has demonstrated that, over time, the saint took on many of the goddess’ attributes and sites. Many recognize these sites as realms of universal sanctity and purpose, and believe they belong to both saint and goddess simultaneously. One of her titles is “The Mary of Ireland.” St. Brigid’s feast day falls on February 1st—the same day on which Imbolc is celebrated.

#Elsewhere in the World

In other parts of the Celtic world, Brigid was known as Brigantes. Her attributes in this iteration remained largely the same, though some regions put an emphasis on her relationship with the dawn. Writers of antiquity occasionally linked her to the Greek Athena (known in Rome as Minerva).

Through St. Brigid, the goddess became Maman Brigitte in Haiti, a Vodou loa. The wife of Baron Samedi, Maman Brigitte was unique in that she was the only non-African loa, having pale skin and red/brown hair, much like the goddess that inspired her. Maman Brigitte reigned over life, death, fertility, cemeteries, and motherhood.

Brigid may also be related to other Indo-European dawn goddesses. Many of the goddesses’ names are derived from the same Proto-Indo-European root word, though the goddesses themselves exist in regions as diverse as Scandinavia and India.

Brigid appeared in several pieces of popular culture, including: