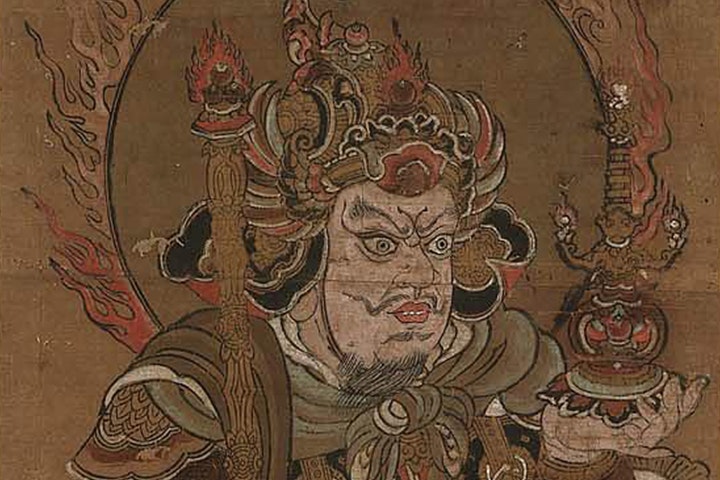 Bishamonten is a Japanese god of war and a Buddhist protector of shrines and holy places. One of the Seven Lucky Gods, he protects the great treasure pagoda of Buddhist offerings and gives these out to faithful believers. He is a Japanese form of the Indian god Vaisravana.

Bishamonten (毘沙門天), or simply Bishamon (毘沙門), can be translated as “Guardian of the One-Hundred Million Heavenly Gates.” This is derived from the Chinese reading of the same characters (Pishamen Tian), which is an alternate name for him in Chinese. He is also called Tamonten (多聞天), which means “listening to many teachings,” relating to his role as protector of the places where the Buddha preaches.

While his original Indian name, Vaiśravaṇa, is a title in Theravada Buddhism, in Japanese Buddhism it is the name of the god.

Bishamonten is a warrior, an armored war god wielding a spear in one hand and a pagoda in the other. This armor is not typical for Japanese warriors, indicating his continental origins. His facial expressions, which vary depending on the artist, are sometimes excited and other times stern and discerning. He is unique among the Seven Lucky Gods: he is the only warrior, and the only one who engages in violence.

The violence surrounding Bishamonten relates to his role as the guardian of worshipers. Although he is primarily described as presiding over places where Buddhists meet and worship, or where an important bodhisattva (a revered Buddhist figure on the path to enlightenment) preached, Bishamonten protects the faithful wherever they are. He also protects the donations they give at places of worship. The pagoda he carries in one hand symbolizes the Divine Treasure House, a many-layered pagoda full of golden gifts given by the faithful and with which Bishamonten rewards his followers. He is a god of fortune as much as he is a god of war.

Bishamonten has many statues dedicated to him at Buddhist temples, as well as at shrines of the Seven Lucky Gods, whose worship is most prominent at the New Year. It is said Bishamonten lives halfway down the summit of Mount Sumeru, an important peak in Buddhist spiritual cosmology that has no direct earthly correlation.

Bishamonten began life in India as the Buddhist deity Vaisravana.

In Theravada Buddhism, Vaisravana is as much a divinity as a title. Different figures fill the role. Vaisravana, one of the Four Heavenly Kings, rules the North, where he oversees the world’s wealthiest cities, which are inhabited by divine beings. Vaisravana is also the defender of the Buddha, whom many sought to destroy for his pure teachings and enlightenment. Anywhere the Buddha preached, Vaisravana defended him and continues to protect those places. At these locations in India and Nepal, trees represent his vigilant presence.

Vaisravana began to take on more godly attributes as his stories spread through China, where one of his names became Pishamon Tian. Mahayana Buddhism spread the worship of Pishamon Tian, causing his stories to reach Japan, where he became Bishamonten. Due to his association with wealth and protection, he quickly entered the group known as the Seven Lucky Gods (also called the Seven Gods of Good Fortune) and became one of Japan’s most revered gods, particularly during the Warring States period (1467-1600).

Although he is derived from Vaisravana and his East Asian forms, in Japan Bishamonten is more closely linked to the Shinto war god Hachiman. At times the two are interchangeable, but they are understood to be different. Hachiman is Japan’s most well known war god, often depicted alongside Bishamonten at the gates of Buddhist temples.