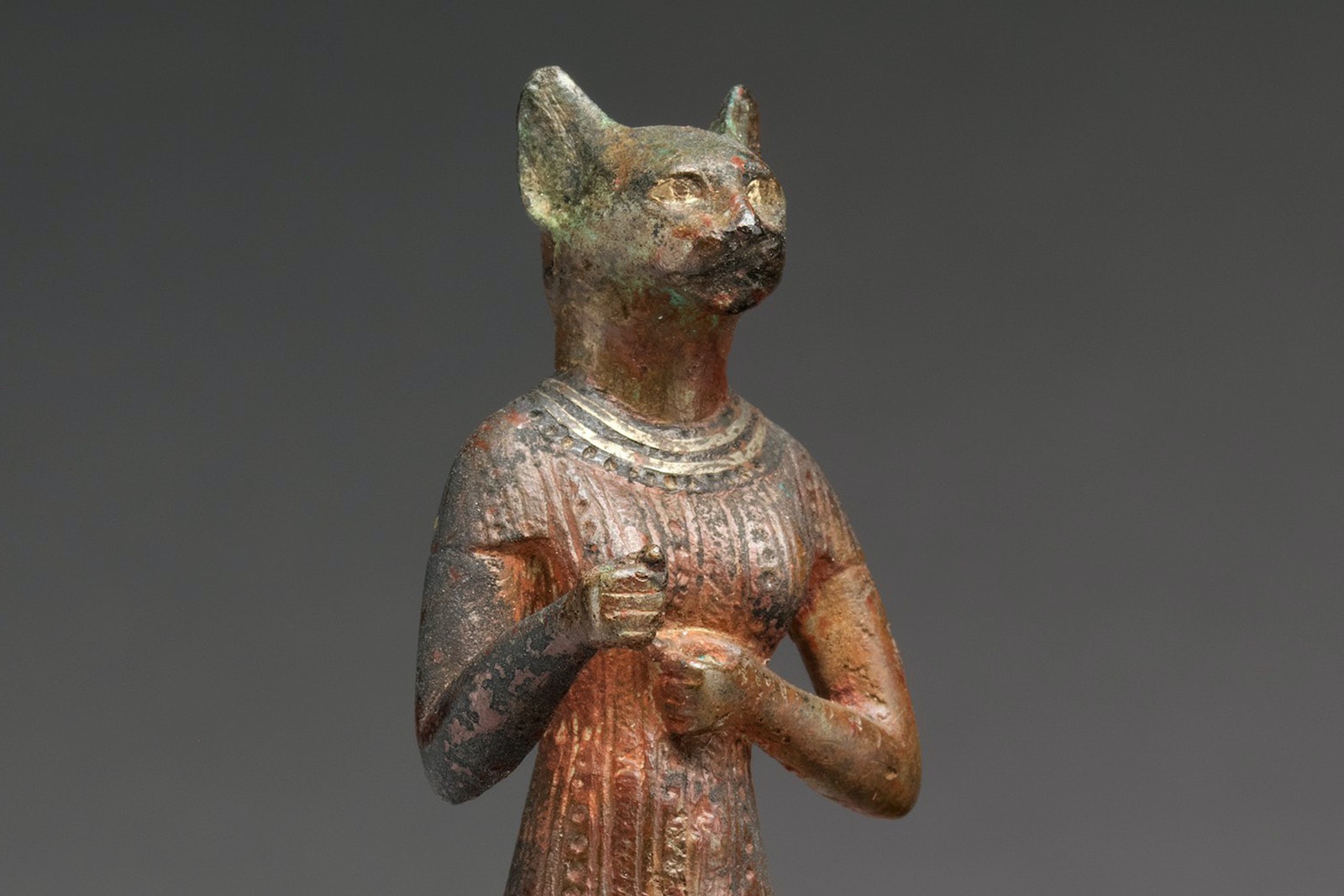 An important member of the ancient Egyptian pantheon, Bastet was a feline-headed goddess who served as a protector of pregnant women and manifestation of the Eye of Ra. Originally a fierce deity, Bastet became more benevolent over time. Her aggressive tendencies were passed on to the goddess Sekhmet.

Bastet’s name translated as “She of the Ointment Jar.” For this reason, she was often depicted bearing a jar adorned with cats.1

It is important to recognize that the names of ancient Egyptian gods were frequently connected with words due to their similar phonetic structures. The ointment jar Bastet was ostensibly named for did not play any role in her mythology or worship, suggesting its connection to her was purely a phonetic one.2

Bastet was easily identifiable in hieroglyphics as the cat-headed woman. She carried her namesake jar and a sistrum, both decorated with feline motifs.3

Some early depictions of Bastet seem to suggest that she was originally a lioness, or lion-headed woman. Over time, however her representation shifted to that of a domestic cat.4 Though the transition from lion to domestic cat may seem radical, it actually reflected a shift in Egyptian society. Cats had only recently become domesticated, and the Egyptians prized them for their ferocity and rapacious nature while simultaneously appreciating their nurturing parental tendencies.5

Bastet was often regarded as a kinder, gentler version of the goddess Sekhmet. Both goddesses were associated with the Eye of Ra and its destructive powers, but where Sekhmet was wrathful, Bastet was protective.6

While the more vengeful aspects of the Eye of Ra were typically associated with Sekhmet, Bastet could be fiercely protective and even ferocious at times.7 She was believed to be a goddess of pleasure, a ward against contagious diseases and evil spirits, and a protector of pregnant women.8

As a manifestation of the Eye of Ra, Bastet was portrayed both as Ra’s daughter and his consort.9 With Ra, Bastet had a son, Mahes, who as a lion god bore strong resemblance to his mother.10

Some myths positioned Bastet as the mother of Anubis. The jackal god’s associations with Isis came fairly late in the development of the Egyptian cosmology, and his connection to the ancient Bastet likely predated them.11

Bastet was a significant deity from a very early period in Egyptian history. At the Valley Temple of Khafre at Giza (c. 2570 BCE), she and Hathor were the only gods whose names were recorded. Initially worshipped as a fierce lioness goddess, Bastet eventually became better known for her gentler aspects. As her softened iteration grew in popularity, she became more and more associated with domestic cats. Following this shift, Bastet was often portrayed as a cat-headed goddess.

Setna and the Book of Thoth

In this myth from the latter half of the first millennium BCE, Prince Setna discovered the Book of Thoth in the tomb of Neferkaptah.12 The ghostly apparition of Neferkaptah appeared before him, telling him he could claim the book if he beat the spirit in a game of senet.13

Senet was a popular Egyptian board game with a long history. Boards have been found dating back as far as 3100 BCE!

Each time Setna was defeated by Neferkaptah, he was struck on the head and driven deeper into the ground. Before long, the prince was buried up to his neck.

Setna called for his brother to bring him his magical talisman. Upon seizing this charm, Setna freed himself, grabbed the Book of Thoth, and fled from the tomb. Victorious, Setna proudly displayed the book and read it to all who would listen.

Later, while Setna was walking through the Temple of Ptah in Memphis, he passed a beautiful woman named Tabubu. Ever audacious, Setna sent his servant to her with instructions to ask her if she would sleep with him for 10 gold pieces. A daughter of a priest of Bastet, Tabubu replied that she was a lady of rank, so their liaison would have to be conducted in secret at her house in Bubastis.

Hardly believing his luck, Setna arranged to meet her there as soon as possible. Upon arriving, Tabubu reminded Setna of her rank and told him that he could only sleep with her if he signed over all of his worldly possessions. The lust-filled Setna agreed to her conditions and called a scribe over to make the deal.

After this, Tabubu changed into a robe that left little to the imagination, inflaming Setna’s passions even more. Tabubu pressed her advantage, telling Setna that she would only sleep with him if he signed over his children’s possessions as well. Setna was all too happy to oblige.

Before Tabubu allowed things to escalate further, she instructed him to kill his children. Again the painfully aroused Setna obeyed, ordering his children to be killed and throwing their bodies to the dogs in the street.

At long last, Setna stripped naked and reached out for Tabubu. When he touched her, however, she let out a piercing scream. In the blink of an eye, Setna found himself standing naked and alone.14

In some versions, the story ends here. In others, however, Setna was redeemed. After repenting and returning the Book of Thoth to Neferkaptah’s tomb, Setna returned home to find his family safe and sound. In either case, the beautiful woman Tabubu was believed to be a manifestation of Bastet, serving in her role as punisher of those who offended the gods.

The Transformation of Sekhmet

Prior to the damming of the Nile, Egypt’s climate was driven by seasonal flooding. These floods were a source of agricultural fertility, but also contributed to seasonal plagues. The ancient Egyptians believed that the goddess Sekhmet was responsible for these plague periods.

Through ritual acts of pacification, however, Sekhmet could be transformed into the more benign Bastet. One ritual involved the practitioner walking around their house wielding a *des-*wood club and reciting a spell:

“Retreat, murders. No breeze will reach me so that passers-by would pass on, to rage against my face. I am Horus who passes along the wandering demons of Sekhmet. Horus, sprout of Sekhmet! I am the Unique One, the son of Bastet – I will not die on account of you!”15

When properly conducted, this spell would transform Sekhmet into Bastet, who would offer the petitioner her protection.

Bastet has appeared frequently in literature. Neil Gaiman referenced the goddess in several of his works, including American Gods and comic series The Sandman. Paul Gallico’s 1957 novel Thomasina, the Cat Who Thought She Was God cast Bastet as its main character—a cat named Bast-Ra. The book was later adapted into the 1963 Disney film The Three Lives of Thomasina.

Patrick Rothfuss’s book series The King Killer Chronicles also included a character named Bast. This iteration appeared as a member of the Fae and had feline features. Finally, Bastet had a role in Michael Scott’s series The Secret Lives of the Immortal Nicholas Flamel.

Bastet has appeared in a number of video games as well. She was featured the MOBA Smite as a playable character, and again in Overwatch as a cosmetic skin for Ana. In Age of Mythology and Age of Empires: Mythology, Bastet was a minor goddess whose worship boosted a player’s villager collection rate.16