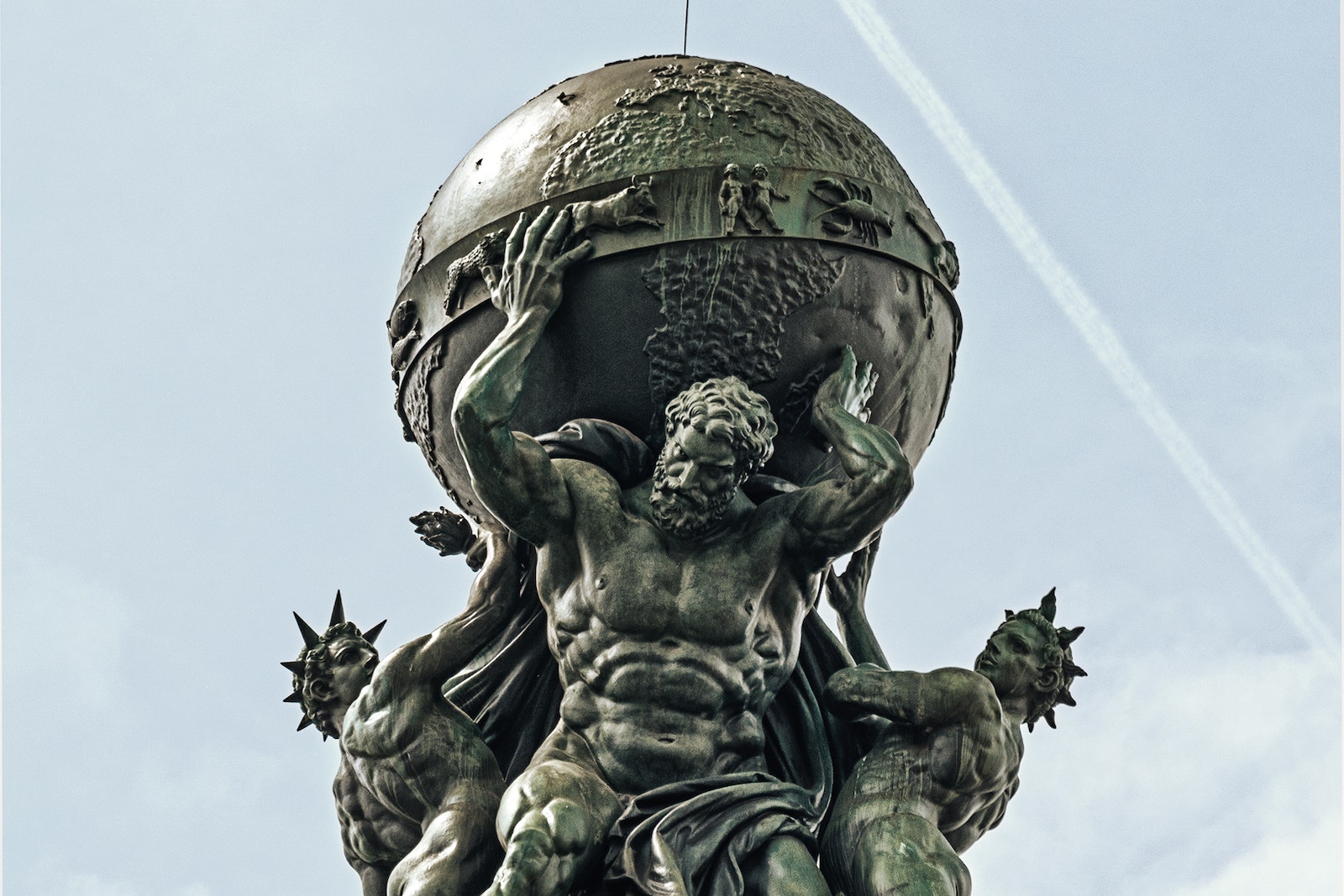 The son of Iapetus and Clymene, Atlas was a Titan famed for his prodigious strength and intelligence. Having been defeated by the Olympians in the Titanomachy, Atlas was condemned to bear the weight of the celestial sphere for all eternity. He was a popular figure in Greek mythology, and appeared in the stories of heroes such as Heracles and Perseus. Closely associated with the earth and other heavenly bodies, Atlas was also a master of astronomy, geography, and navigation.

The name “Atlas” was likely the result of joining the prefix a- with the ancient Greek word tlēnai, meaning “to bear.” The latter may have been used in reference to Atlas’ reputation as the bearer of the celestial sphere. Some modern scholars, however, insist that Atlas’ name is pre-Greek in origin.1

An alternative etymology suggests a North African origin for Atlas’s name, and ties it to the Atlas Mountains in northwestern Africa. According to this theory, the Greek name “Atlas” was derived from adrar, the Berber word for the mountains that resonated so strongly with the mythic figure.

Atlas was often given the epithet Telamōn (“enduring”), due to his toils as the bearer of heaven.2

A figure of prodigious strength, Atlas famously bore the world on his shoulders and was renowned for his wit and wisdom. According to a number of ancient sources, such as Diodorus of Sicily’s Library of History, Atlas was a master philosopher, mathematician, astrologer and astronomer. Some sources have even described Atlas as the inventor of astronomy: “For Atlas had worked out the science of astrology to a degree surpassing others and had ingeniously discovered the spherical nature of the stars.”3

Atlas had a large family with many distant connections. According to the best-known tradition, he was the son of the Titan Iapetus and the Oceanid Clymene;4 there was, however, another version in which his mother was Asia (also an Oceanid).5 Atlas had several brothers, including Prometheus, Epimetheus and Menoetius. In some traditions, Atlas’ father Iapetus also fathered Anchiale,6 Buphagus,7 and Dryas.8

Atlas had a number of lovers, including Hesperis, Pleione, and the Oceanid Aethra. With Hesperis,9 Atlas sired the mysterious Hesperides, who were sometimes known as the Atlantides.10 With either Pleione11 or Aethra,12 Atlas had seven daughters known collectively as the Pleiades (Maia, Electra, Taygete, Alcyone, Celaeno, Sterope and Merope), who achieved fame as the companions of Artemis, and would later transform into stars to elude the amorous pursuits of the hunter Orion.13

Atlas also had other daughters, including Calypso,14 an enchantress famed for her seven-year affair with Odysseus; Dione;15 Maera;16 and the Hyades, a group of nymphs known as rain-makers.17 Atlas had a son named Hyas, an archer and hunter, with either Pleione18 or Aethra.19

Though much about Atlas’s origins remains unclear, Hesiod’s established his mythic role as it was understood in the seventh century BC, when his epic Theogony was composed. According to Hesiod, Atlas fought alongside his kin in the Titanomachy, when the Olympians rose up in arms against the Titans. Ultimately, the Titans fell to the usurpers’ superior strength, and Zeus meted out punishments to all who had opposed him. Atlas was tasked with supporting the “celestial sphere”—that is, the heavens or the sky.

As Hesiod wrote, “And Atlas through hard constraint upholds the wide heaven with unwearying head and arms, standing at the borders of the earth before the clear-voiced Hesperides; for this lot wise Zeus assigned to him.”20

Atlas and the Heroes

While Atlas had no myths to call his own, he did make several appearances in the tales of Greek heroes. During Heracles’ Twelve Labors, Atlas aided Heracles in retrieving a set of golden apples. The apples, which were kept in Hera’s garden, were tended by the Hesperides, Atlas’s daughters (hence their name, the “Apples of the Hesperides”). Atlas agreed to fetch the apples, asking only that Heracles hoist the celestial sphere while he was away.

When an unburdened Atlas finally returned with the apples, he saw an opportunity to be free of his curse forever. He tried to trick Heracles, offering to deliver the apples with the intention of leaving Heracles to the bear his eternal burden. Heracles saw through the ruse, however, and asked Atlas to hold the celestial sphere for a moment while he rearranged his cloak. Relieved of his tremendous load, Heracles stole away with the golden apples and left Atlas to bear the weight of the heavens once more.

In another version, however, Heracles built the Pillars of Heracles to hold up the sky.21 He thus freed Atlas from his punishment, just as he freed Atlas’ brother Prometheus from the eagle sent every day to eat his liver. There were also other traditions in which Atlas was eventually released from his punishment.22

Atlas also appeared in a tale of Perseus, the legendary hero of early Greek lore. According to Ovid’s Metamorphoses, Perseus traveled to Atlas’s kingdom in northwestern Africa and demanded shelter, claiming that he was the son of the great Zeus. Atlas refused, as he had received a prophecy foretelling the downfall of his kingdom at the hands of one of Zeus’s offspring. In his rage, Perseus used Medusa’s head to transform Atlas into a stony mountain range—the Atlas mountains. Ovid described this scene in vivid detail:

Although he dared not rival Atlas' might, Perseus made this reply; “For that my love you hold in light esteem, let this be yours.” He said no more, but turning his own face, he showed upon his left Medusa's head, abhorrent features.—Atlas, huge and vast, becomes a mountain—His great beard and hair are forests, and his shoulders and his hands mountainous ridges, and his head the top of a high peak;—his bones are changed to rocks. Augmented on all sides, enormous height attains his growth; for so ordained it, ye, O mighty Gods! who now the heavens' expanse unnumbered stars, on him command to rest.23

There were some “rationalizations” of the myth of Atlas circulating in the ancient world. According to some authors, Atlas was a wise king who ruled in north Africa. Because had an expansive knowledge of astronomy, he was figuratively said to hold the heavens on his shoulders.24

Atlas has remained a prominent figure in modern popular culture. The name of the Atlantic Ocean can be traced to Atlas, albeit indirectly. The ancients called this body of water the “Ocean of Atlas,” and it is from this title that the current name is derived. The same was true of the Atlas mountains, which Ovid believed to be the physical form of the petrified Titan. The term “atlas” is also used to refer to a book of maps. This usage originated in the sixteenth century, when Gerardus Mercator—father of the Mercator projection—dedicated his map of the world to the ancient Titan once tasked with holding up the heavens.

The iconic image of Atlas bearing the world on his shoulders has been depicted in countless statues, most notably in Rockefeller Center, New York City. Depictions of the Titan have also appeared throughout European architecture, where they are used in place of (or at the top of) a column, making it appear as though Atlas is supporting the structures above.

Atlas was, rather ironically, appropriated by Ayn Rand in her dystopian novel Atlas Shrugged (1957).