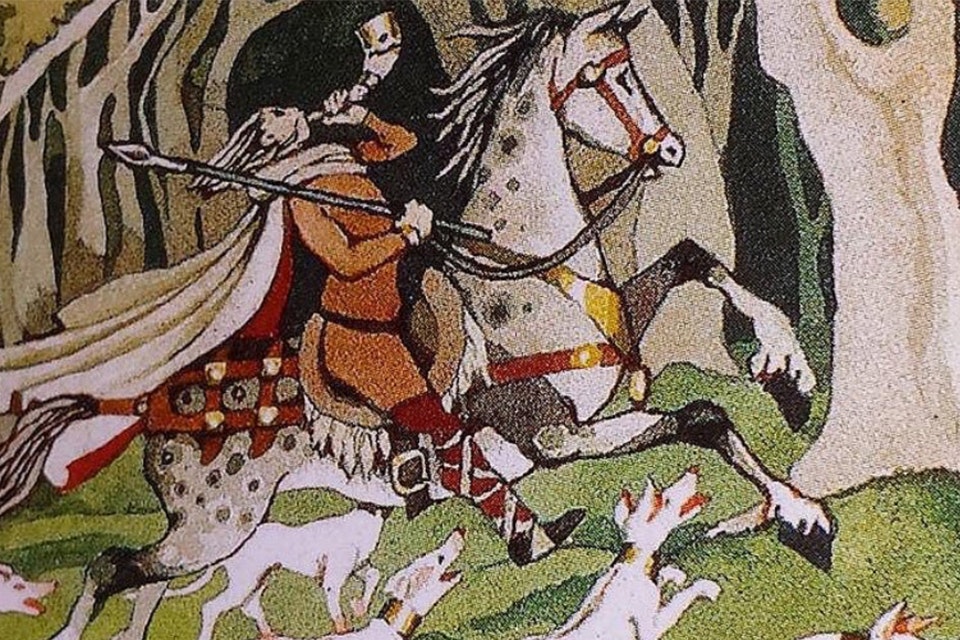 Arawn is the Welsh lord of the realm of Annwn, the Otherworld of the Mabinogi. A great hunter and magician skilled in shapeshifting, he is best known through his connection to Pwyll, Lord of Dyfed.

As Christians began to demonize Welsh mythology, Arawn took on many negative traits and gained titles beyond the traditional Lord of the Underworld or Otherworld. He became Lord of the Damned, who oversees the souls denied Christian paradise and whose hellhounds hunt eternally for souls of the impure.

Arawn’s defining trait is that he is Lord of Annwn, the Welsh Otherworld. Annwn is listed in different legends as an island off the coast of Wales, a cauldron or kingdom beneath the sea, or simply underground. Described as a blessed paradise, it is connected by some writers to the Arthurian Avalon, the Isle of the Blessed. Arawn is a just ruler, beloved by his court and his Queen, though he has competition for his rule.

Arawn appears as a skilled magician, able to switch his appearance for an entire year with the hero Pwyll. The magic is so effective that not even Arawn’s own wife knows of their switch. In “Cad Goddeu,” Arawn summons a great host of Annwn to battle and magically enhances them, but despite this is defeated by Gwydion.

In addition to being a great ruler and skilled magician, Arawn appears as an adept hunter who loves sport, enough that every day his court goes hunting with his supernatural white-eared red-eyed dogs.

Fall is Arawn’s time, connected to the baying of great hounds and the cries of geese headed south for the winter. The traditional Celtic year typically ended in fall on Samhain, which we know today as Halloween. Samhain is a day when the spirits of the dead walk freely on the Earth, highlighting Arawn’s role as Lord of the Underworld.

With the rise of Christianity in the British Isles, Arawn’s association with death led to his demonization. Annwn, as the Welsh Otherworld, becomes a place for the souls of the damned, and Arawn as its lord became lord of the damned. Similarly, the hounds of Arawn became associated with hellhounds hunting the spirits of the damned.

Little is known of Arawn’s family beyond his unnamed wife, the Queen of Annwn, who loved her husband dearly.

Arawn appears primarily in the Mabinogi, most notably in the First and Fourth branches.

In the First Branch of the Mabinogi, Pwyll, ruler of Dyfed, pursued a stag with his hounds one day. A strange set red-eyed of hounds caught the stag and tore it to pieces. After chasing them off, a rider appeared and informed Pwyll that he was in Annwn, and for stealing the king’s stag he must submit himself to Arawn for mercy.

Arawn offered Pwyll a strange form of penitence: they would trade places for a year, taking the form of one another. Pwyll accepted, even agreeing to defeat Arawn’s rival Hafgan much to Arawn’s surprise. So for one year, during the day Pwyll took the court hunting, and by night they feasted. When entering his bed at night, Arawn’s Queen offered herself to him, and though Arawn did not forbid it, Pwyll refused to sleep with her.

The year came to an end and the two men met again, with Pwyll revealing he did all that Arawn asked and more: he remained chaste for the entire year. Arawn revealed the same and the two returned to their rightful place.

In the Fourth Branch, Arawn appears only in the form of gifts that are given to Pryderi, son of Pwyll. Each year, pigs are sent from Annwn and are meant to be kept for Pryderi’s use. They become the primary plot point of the section and in Pryderi’s conflict.

From the Book of Taliesin comes a poem “Cad Goddeu”, or “The Battle of the Trees.” While not explicit, the story tells of a dog, a lapwing, and a buck that are stolen from Annwn by Amaethon, who is pursued by Arawn. Thus began the Battle of the Trees, where Arawn summoned a great series of monsters and enhanced them with magic, until Amaethon’s brother Gwydion, using magic and the grace of God, summoned the trees to defend them, ultimately defeating Arawn.

The story of Arawn and Pwyll is similar to Sir Gawain and the Green Knight, with Arawn as the Green Knight. In both, the human hero is tempted by the wife of their host, and in both they manage to resist the temptation. Their resemblance as skilled hunters, warriors, and masters of their realm adept in the use of magic further connect the two, as does Pwyll’s appearance in some Welsh Arthurian legends.

Arawn may also be connected to the Celtic god Arubianus, an agricultural deity found in South Germany. This could explain the bounty and wonder of Annwn, Arawn’s realm, and the fact that Annwn may be a literal underworld, from where the bounty of the earth comes. Little else is known of Arubianus.

As lord of the hunt, Arawn is connected to other Celtic gods, including Cernunnos, a mysterious Gaullish god who is considered the lord of wild things. Similarly, Arawn is related to Odin, the Norse Lord of the Dead who also happens to be a master magician. His Germanic form, Wotan, is skilled in hunting and Lord of the Wild Hunt, a title that sometimes goes to Arawn.

Through his role as Lord of the Underworld, Arawn resembles the Greco-Roman Hades/Pluto, as both are rulers of the dead and not entirely the villain later writers make of them. In this same sense, Arawn (and Hades) are connected to the Abrahamic Satan.

Arawn is a popular figure whose modern persona is largely colored by popular culture: