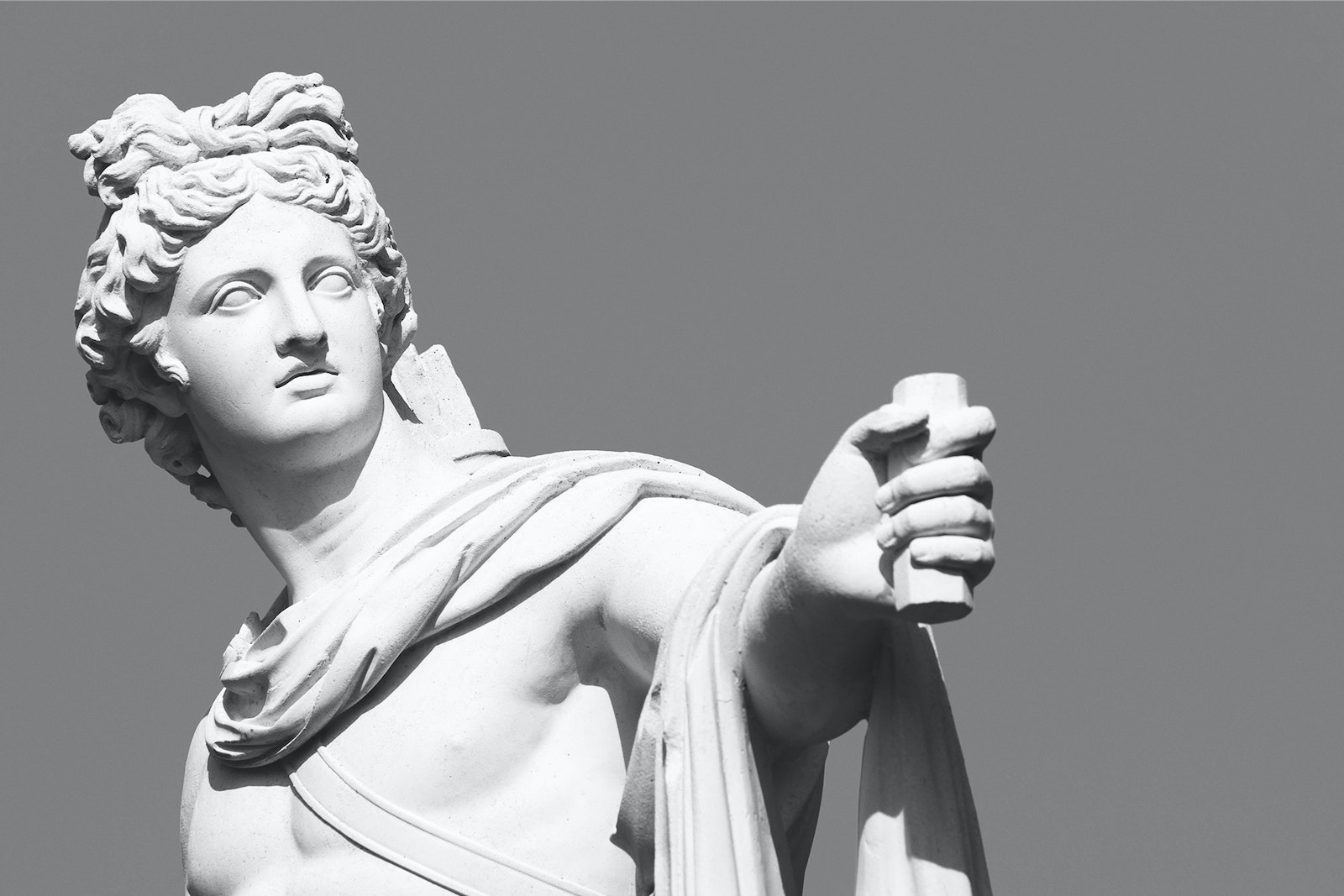 Borrowed directly from Greek mythology, Apollo was a Roman god that inspired music, poetry, and artistic creativity. A law-giver and healer, Apollo brought order to humankind and was the source of all medical knowledge. Furthermore, Apollo served as the chief patron of prophets, the source of the gift of prophecy. He was thought to reside at Delphi, the center of oracular thought in the ancient Mediterranean.

While the Romans almost always adopted their deities from Greek and Etruscan counterparts, they typically took the effort to Romanize them. Apollo bucked this trend, however, retaining his status as a foreigner and an outsider; as such, his original mythology remained largely unchanged. Apollo’s incorporation into Roman mythology underscored the Romans’ conception of themselves as the rightful inheritors of Greek culture.

Despite his foreignness, Apollo was much beloved by the Romans, who viewed him as a source of political stability and medical knowledge, as well as a guardian against infectious disease.

As with many Greek deities, the etymology of “Apollo” has remained obscured. It may have been derived from the archaic Greek noun apéllai, meaning “an assembly,” like those conducted in the Greek poleis. This etymology would make the name “Apollo” translate as “he who assembles,” or “he of the assembly,” likely referring to his reputation as the bringer of civilized order.

Alternatively, the name “Apollo” may have come from the words apeilḗ, a noun meaning “promise, boast or threat,” and apeiléō, the verb form meaning “to make a promise, boast, or threat.” Such an etymology would render “Apollo,” in the words of one scholar, as “the god of authoritative speech, the one who presides over all manner of speech-acts, including the realms of songmaking [sic] in general and poetry in particular.”1

Regarded as the ultimate bringer of law, reason, and peace, Apollo oversaw the creation of civil constitutions and maintained the social order. He was also the patron of many important cities, including Delphi and Rome.

Apollo’s role as the preserver of the body politic was mirrored in his role as the healer of bodies. Via his son Asclepius, Apollo gave humanity the gift of medicine. He also served as the patron of doctors, including the great Hippocrates of Cos (ca. 460-370 BCE). Hippocrates’ medical theories would later go on to influence Roman physicians, such as Galen (129-210 CE). Hippocratic and Galenic ideas would form the basis of medical theory and practice until the eighteenth century.

Just as Apollo cured disease, he also caused it. Wielding a silver bow, he fired plague arrows at all who crossed him, including the Achaeans during the battle of Troy. Romans regarded pestilence as the wrath of Apollo.

Apollo usually carried a lyre, his favorite musical instrument, and was often portrayed as a beardless youth. Described as “shining” and “the sun,” he was sometimes depicted with rays of light emanating from his body. This literal and metaphorical light symbolized the enlightenment that Apollo bestowed upon his followers.

Apollo was the child of Jupiter, the king of all gods, and Leto, a Greek Titan. His twin sister was Diana, the Roman counterpart to the Greek Artemis. Among others, his half siblings included Mars, Vulcan, and Juventus.

While Apollo had many children, the best known were Asclepius, a famous physician whom Apollo delivered with a caesarean procedure, and Orpheus, a legendary musician and prophet. Apollo’s other children included Delphos, Miletos, Tenes, Epidaurus, Ceos, Lycoras, Syrus, Pisus, Marathus, and Chaeron. These offspring would all go on to establish eponymous cities. He also fathered the noted oracles Apis, Idmon, and Tenerus.

The Apollo mythos began with his remarkable birth from the union of Jupiter and Leto. Though the two were married when Jupiter impregnated Leto, their marriage ended before their children were born. Jupiter’s new wife, his jealous sister Juno, carried grudges against all of Jupiter’s lovers. When Juno discovered that Leto was pregnant with Jupiter’s offspring, she banished the Titan from mainland Greece and spawned a terrible sea serpent named Python to pursue her.

A terrified Leto wandered from island to island, seeking refuge and a community that would support her. As she continued to flee, she heard the voice of an unborn Apollo whisper to her from within the womb, advising her to seek the small and uninhabited island of Delos. Settling on the island, Leto soon found herself in the throes of labor. When Juno discovered Leto’s condition, she imprisoned Lucina, the goddess of childbirth and midwifery, preventing her from attending to Leto.

After suffering the prolonged agonies of childbirth, Leto finally brought Diana into the world. Fully formed, the precocious Diana immediately moved to help her mother deliver her twin brother. Apollo came into the world clutching a bronze sword, and was wrapped in a white cloth fastened with a gold band. He was fed nectar and ambrosia by the goddess of law, and within days he had wondrously developed into a full grown man.

Apollo’s first order of business was to hunt and slay the Python, the beast that Juno had spawned to murder Leto and her unborn children. He took his weapons from Vulcan, the craftsman deity, who made Apollo his signature silver bow. After receiving a silver bow from Vulcan, Apollo tracked the beast to Delphi and slayed it with an expert shot. This story quickly became a favorite among the Romans, who would celebrate their victories by singing paeans commemorating Apollo’s own victory.

In his youth, Apollo also discovered his love and skill for music. Shortly after Apollo’s birth, the wily messenger god Mercury stole Apollo’s cattle and hid them in a cave. While in hiding, Mercury killed a tortoise and used its entrails and shell to fashion a lyre, the very first instrument of its kind. Apollo appealed to Jupiter, who often settled disputes among the gods, and the king of the gods ordered Mercury to return the stolen cattle. When Mercury came to return the cattle, Apollo noticed him playing the lyre and was so attracted to the instrument that he agreed to accept it in lieu of his herd. Apollo quickly mastered the instrument and soon was celebrated as the greatest of all musicians.

Some time later, the rustic god Pan compared his music to Apollo’s. The shining god became incensed at the comparison and challenged Pan to a contest. While the judges declared Apollo to be the winner, King Midas of Phrygia dissented. As punishment for his insolence, Apollo cursed Midas with donkey ears.

Ovid’s Metamorphoses described a similar episode involving Marsyas, a satyr who boasted of his musical superiority to Apollo. Marsyas also played the flute, and Apollo soon challenged him to a contest. When the contest was settled and Apollo had emerged the victor, he punished Marsyas’ hubris in a cruel manner. After hanging Marsyas from a tree, Apollo flayed his skin from his body. He then tied the satyr’s hide to a tree and allowed the blood to flow off of it. Ovid described the scene in disturbing detail:

Why do you tear me from my self, he cries? Ah cruel! must my skin be made the prize? This for a silly pipe? he roaring said, Mean-while the skin from off his limbs was flay’d. All bare, and raw, one large continu’d wound, With streams of blood his body bath’d the ground. The blueish veins their trembling pulse disclos’d, The stringy nerves lay naked, and expos’d; His guts appear’d, distinctly each express’d, With ev’ry shining fibre of his breast.2

#Apollo and the Roman State Religion

The first evidence of Apollo’s adoption into the Roman pantheon appeared after a plague struck Rome in 433 BC. Seeking intercession and mercy, the Romans built and dedicated a temple to Apollo Medicus, or “Apollo the Doctor.” Though initial work was completed in 431 BCE, the temple soon fell into ruin. It was rebuilt several times over the centuries, most notably by Gaius Sosius in the first century BCE.

After the plague, Apollo became a fixture of Roman worship. Kings and religious officials often consulted the oracle at Delphi, where Apollo gave prophetic inspiration. The Romans also celebrated the god at festivals, and in 212 BCE, during the Second Punic War with Carthage, they instituted the Ludi Apollinares, or “Apollonian Games,” which featured gladiatorial combat among other gruesome pastimes.

During the reign of Augustus (31 BCE–14 CE), the first emperor of Rome, the cult of Apollo witnessed a surge in popularity and importance. Much of this could be attributed to the emperor himself, who believed Apollo favored his cause in the long civil war against the republicans and Marcus Antonius. The final battle of the Roman civil war, the naval battle of Actium in 31 BCE, took place next to one of Apollo’s temples in mainland Greece. To repay the debt he thought he owed, Augustus dedicated spoils to Apollo and constructed a new temple in his honor on the Palatine Hill.

Apollo has been featured in a number of popular works, such as the Percy Jackson & the Olympians books by Rick Riordan and The God of War video game series. The National Aeronautics and Space Administration (NASA) appropriated the figure of Apollo for its famous space program, which accomplished six moon landings and safely delivered twelve astronauts to the moon and back. Apollo was chosen to represent the program because he symbolized accuracy.