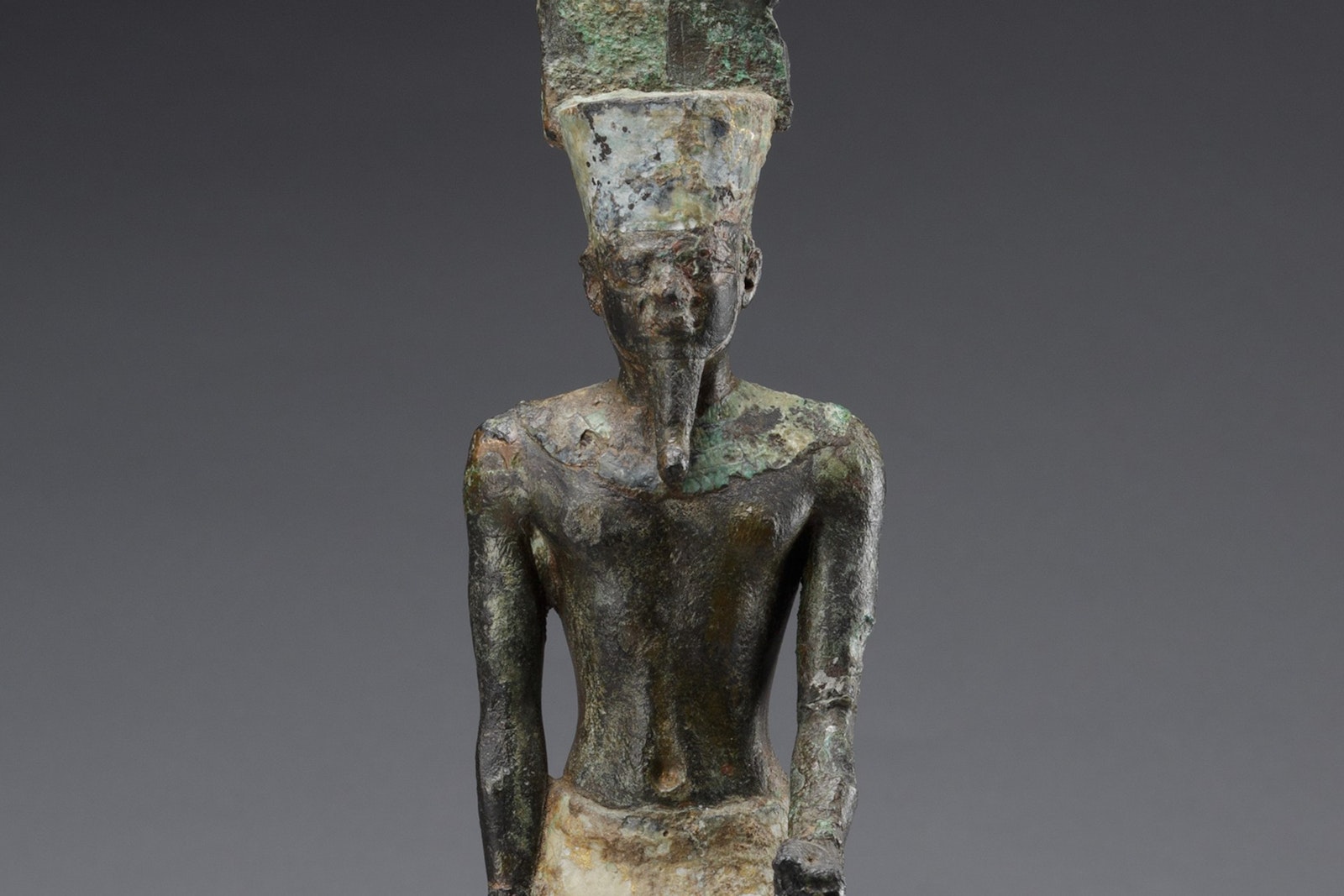 One of the most important gods in the Egyptian pantheon, ram-headed Amun was a key member of the Hermopolitan Ogdoad and the Theban Triad. Amun was often combined with Ra, with whom he shared many cosmological similarities. In their respective cults of worship, each was hailed as a creator deity and the head of the Egyptian pantheon.

Amun was somewhat unique within Egyptian theology, as he possessed many characteristics emphasized in modern monotheistic deities (such as Christianity’s God, Judaism’s Yahweh, and Islam’s Allah). Omnipresent and all-powerful, Amun was unknowable even to his fellow gods and goddesses.

Amun’s name meant “the hidden one,” a reference to his omnipresence.

Amun gained several additional titles after he was merged with other prominent Egyptian gods. Among these titles were:

Finally, “Amonrasonther,” the Greek name for Amun, was likely a transliteration of the Egyptian name Amun-Re Nesu Netcheru (Amun Ra, King of the Gods). The Greeks took his title very seriously, and by the Ptolemaic period Amun had become associated with their chief god Zeus.9

Over the course of his worship, Amun grew from a small, but significant local deity to the single most powerful god within the Egyptian pantheon. During this transformation, he merged with a number of other deities and absorbed the attributes of those he displaced.

Amun’s attributes were legion, and he was variously identified as:

While other Egyptian gods were thought to reside in specific locations (desert, underworld, sky,etc.), Amun was everywhere at once (hence his connections to the wind). Though his presence could always be felt, it was never seen.11 Amun’s omnipresence was radically different from the presence of other Egyptian gods, though such a trait is often associated with the gods of the Abrahamic tradition.

Amun’s omnipresence was also paired with an uncommon omnipotence. He was frequently referred to as the “hidden” god, a term with a very specific meaning. To know someone’s name was to have power over them, a fact exploited by a number of Egyptian deities (see Extorting the Sun: Isis Poisons Ra). Amun’s true name, however, was hidden from gods and mortals alike. The Egyptians believed that if a mortal were to learn Amun’s true name, the knowledge would kill them instantly.12

Amun was depicted in a variety of ways, with the most common being that of a bearded man wearing a dual-feathered plume. He often wore a short kilt and a feather-patterned tunic.13 While Amun was frequently depicted as having blue skin, later representations used red as well.

Compared with other Egyptian deities, Amun had a relatively simply family tree. According to Theban beliefs, Amun was part of a group known as the Theban Triad. The other members of this triad were Amun’s wife Mut, and their son Khonsu.15

The competing religious cult of Hermopolis held that Amun was a member of the Ogdoad—a group of eight primordial gods and goddesses who created the universe. According to the Ogdoad, Amun took Amunet as his wife (or consort).16

Amun rose to mythological supremacy relatively recently, only becoming the most powerful god during the New Kingdom (c. 1200BCE). During the era of the Middle Kingdom (2066-1780BCE), and thus prior to his ascendency, Amun was simply a local god based in a town outside of Thebes. During this time, he shared his cosmological space with the gods Montu, Wast, and Min.17

As Amun’s cult grew in power, he assumed the roles (and occasionally the names) of these now-smaller gods. By the 18th Dynasty (c. 1549BCE), Amun had assumed the traditional roles of the sun god Ra, beginning the assimilation process that eventually culminated in the creation of the national god Amun-Ra.

As the two gods merged, so too, did their mythologies. Much of Amun-Ra’s combined folklore stemmed from Ra’s storied mythos, rather than Amun’s significantly newer tradition. What follows are mythological accounts that are unique to Amun—visit Ra to see a more complete version of Ra’s mythology.

The Creation of Nun

In the Hermopolitan tradition, the universe was born from the primordial waters of Nun. From these waters emerged the Ogdoad: a group of eight gods who would create the world.

Amun was unique among the gods of the Ogdoad, as he was the only god who predated the waters of Nun. Amun’s epithets “Bull of his mother” and “Bull who ejaculates Nun” directly referenced his ancient, self-generative nature.18

The Egyptians did not concern themselves with the logistics of Amun being his own father; most simply took the myth at face value.19

Amun played a central role in another creation myth, this time as the primordial goose called the Great Honker or the Great Shrieker. In this myth, Amun’s cry was the first noise to break the silence of non-existence. As the Great Honker, Amun also laid the egg that would eventually become the world.20

Though he was instrumental in a number of Egyptian creation myths, Amun’s own origins was shrouded in mystery. Even among his godly peers, Amun’s nature remained hidden and unknowable.21

The Ram and the Hidden God

It may seem strange that the hidden god had so many statues bearing his likeness. However, the scholar Herodotus suggested that at least some of these depictions disguised Amun’s true nature.

In one myth recounted by Herodotus, Amun’s son Khonsu wanted to know what his father looked like. Amun, reluctant to reveal himself even to his own son, devised a plan to satisfy Khonsu’s curiosity. Amun decapitated a ram and presented himself to Khonsu bearing the skull in front of his own head to maintain his secrecy.22

According to Herodotus, the Egyptians believed that the ram was a sacred creature. Once per year, a ram would be sacrificed in celebration of this tale; at all other times, the ram was revered and protected.23

For the Ancient Egyptians, religion and politics were inextricably linked: rulers were literally the divine offspring of the gods. While this connection was always important, it was even more vital for rulers who found themselves in a tenuous position. In such cases, rulers would use their purported lineage to solidify their divine credibility.24

Despite the traditionally limited leadership roles available to women, Hatshepsut found herself in a position to rule all of Egypt during the 18th Dynasty (1550-1229BCE). A cunning politician, Hatshepsut recognized that she needed to strengthen her claim to the throne if she was to remain in power. Thus, she set about recording her divine descent in her newly-constructed temples.

Hatshepsut’s temples record a myth of Amun-Ra meeting with his council to decide who would succeed Thutmose I. According to this myth, it was decided that the yet unborn Hatshepsut would rule Egypt, and would be born of Thutmose I’s legendarily beautiful wife Aahmes. Taking on the visage of Thutmose I, Amun-Ra made his way into Aahmes' bedchambers. Within these chambers, the god and the queen made love and conceived Hatshepsut.25

Not content to leave without revealing his true nature, Amun-Ra told her she had in fact been sleeping with the King of the Gods. Furthermore, he explained that she would bear a daughter named Hatshepsut who would rule over all of Egypt with Amun’s blessings.

Amun was not yet finished ensuring Hatshepsut’s success. After departing Aahmes, he went to Khnum, the deity who created humans on his potters wheel, and instructed him to throw the newest king of Egypt with utmost care. Hatshepsut’s birth was supported by a host of gods and goddesses, including Meskhent (goddess of births), Bes (protector of new mothers), Heget (a form of Hathor associated with fertility), and Khnum and went easily.

After Hatshepsut was born, Hathor brought her to Amun so he could look upon her. She suckled at the teat of the cow-headed goddess, and afterwards was looked after by Iat (goddess of milk).26

This carefully recorded story ensured that any doubts as to Hatshepsut’s cosmological legitimacy were laid to rest.

Amun-Ra appeared as a playable hero in the MOBA video game Heroes of Newerth (HoN). The in-game flavor text makes it clear, however, that the character is not closely related to the historical deity.27

The video game Assassins Creed: Origins referenced Amun through its use of the Temple of Amun at Siwa as one of its playable regions. A remote oasis in Western Egypt, Siwa did, in fact, have a large temple complex dedicated to Amun.28