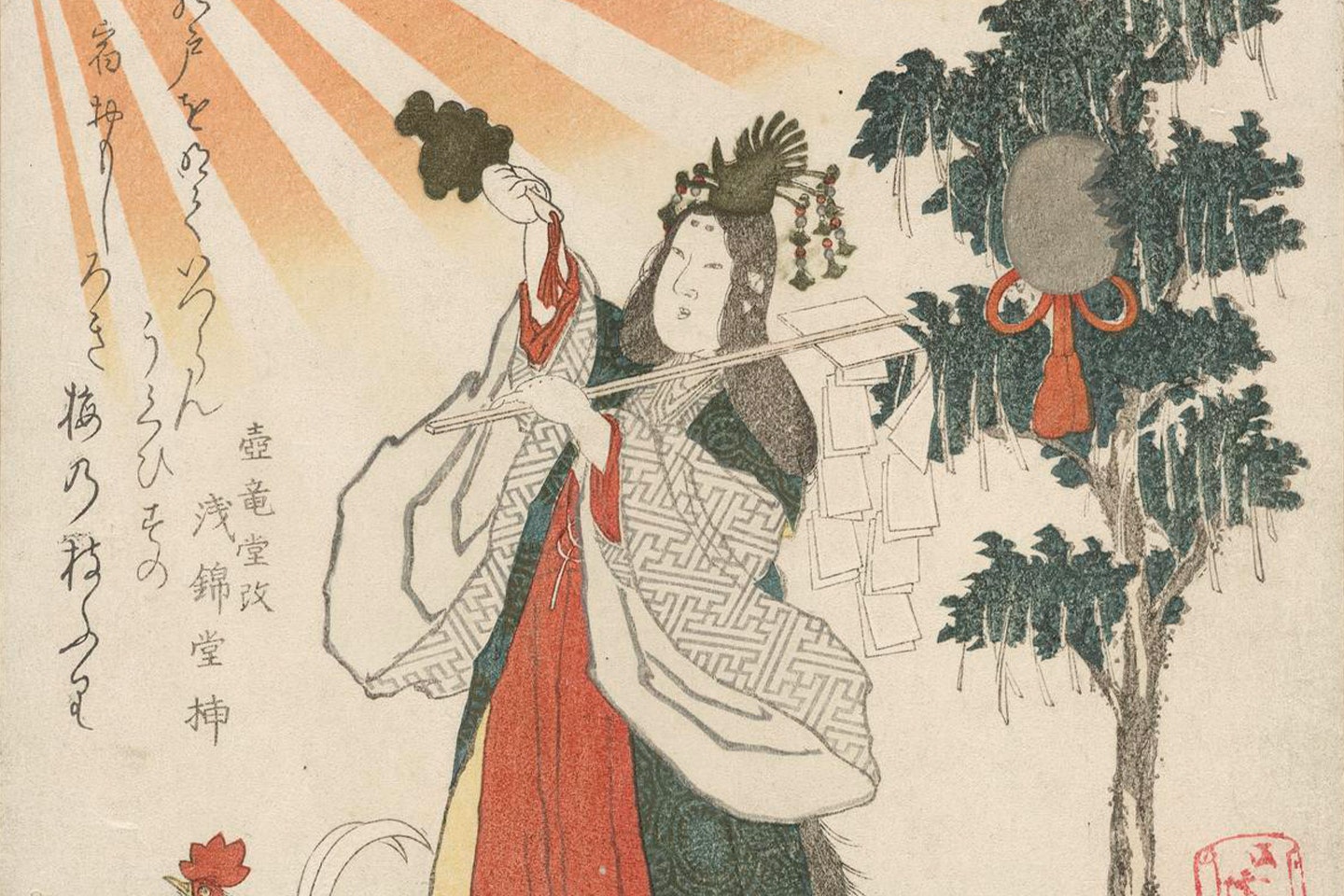 Ame-no-Uzume is the Shinto goddess of dawn, a master of merry-making, humor, and dancing. A highly positive kami (a type of god or spirit in the Shinto religion), her ingenuity brought Amaterasu, the sun goddess, back into the world, saving the earth from eternal winter’s night. A popular deity, Ame-no-Uzume is credited with the origination of the performing arts.

Ame-no-Uzume’s full name is Ame-no-Uzume-no-Mikoto, represented by the Kanji 天宇受売命 or 天鈿女命. Her name is sometimes shortened to Uzume, and the name Ame is sometimes rendered and pronounced as Ama, both of which mean light. Her name can be translated a number of ways, one of which is “The great goddess, shining Uzume.” Other derivations include “The Great Persuader,” or the “Heavenly Alarming Female.”

An alternate appellation of hers is Omiyanome-no-okami, rendering her a retainer of the goddess Amaterasu from Yanome (near Fukushima), translated as “The great goddess, retainer from Yanome.” In comedic theater, she is often called Okame.

Traditional stories describe Ame-no-Uzume as wearing loose or revealing clothing, which other kami in these stories find comical, but Ame-no-Uzume is joyful and unconcerned. Unlike the very reserved and proper Amaterasu, Ame-no-Uzume is open, easygoing, and dedicated to bringing joy to the world. Her nature makes her a great diplomat, and she acts as one of Amaterasu’s most trusted servants.

Mirrors, a sacred symbol of the Imperial family, are often connected to Ame-no-Uzume because of the way the ocean on Japan’s eastern coast reflects the dawn sun like a mirror.

Ame-no-Uzume is credited with the creation of many Japanese art forms, such as kagura, a kind of dance telling the stories of kami, and some forms of comedy and theater such as the ancient noh. Ame-no-Uzume is often depicted in kyogen, a comedic theater tradition, and here she is often displayed semi-nude to comic effect. Because of these theatrical connections, Ame-no-Uzume is the goddess of revelry.

In relation to her husband, she is also considered an inari kami, or a goddess connected to kitsune, Japanese fox spirits known for their cunning and wiles.

Ame-no-Uzume’s husband is Sarutahiko Okami, leader of the earthly kami. Their children created the theater forms of kagura and noh.

Ame-no-Uzume appears predominantly in the tale of Amaterasu and her family.

Amaterasu and the Cave

...and stamping till [Ame-no-Uzume] made it resound and doing as if possessed by a Deity, and pulling out the nipples of her breasts, pushing down her skirt-string [all the way to her] privates.
-Kojiki, translated by Basil Chamberlain

Amaterasu had gone into hiding, for her brother Susanoo had shamed her greatly. With her disappearance, and consequently that of the sun, the world went cold and dark. No matter how hard the kami tried, they could not convince Amaterasu to reappear.

Ame-no-Uzume, a young maiden, concocted a plan with the other heavenly deities. She began to dance comically for all the kami to see, taking off various pieces of clothes until she was partially nude. Her dancing and nudity were so hilarious that the kami began to roll with laughter.

Inside the cave where she was hiding, Amaterasu heard the laughter and grew curious. She pushed away the rock that blocked the cave’s entrance and saw Ame-no-Uzume dancing; amused, Amaterasu came out to get a better view. Exiting the cave she discovered a mirror erected by Ame-no-Uzume. Distracted by her own reflection, the other gods pushed the rock back across the cave’s mouth and bound it with sacred shimenawa rope, preventing Amaterasu from reentering the cave and causing the sun to return to the world. Ame-no-Uzume, it turned out, was the savior of all.

Later, when Amaterasu sent her grandson Ninigi to rule the world, the earthly kami Sarutahiko refused to cede his land to Ninigi until convinced to do so by Ame-no-Uzume. She and Sarutahiko later married and had children together.

Ame-no-Uzume is often compared to other dawn deities, such as the Vedic Ushas and Greek Eos, who share a Proto-Indo-European root. Ushas in particular is similar in that her tale involves a cave and the exposure of her breasts in goodwill.

Ame-no-Uzume is found in popular culture, including:

In the Megami Tensei video game franchise and the Persona series in particular, has appeared often as a summonable demon.